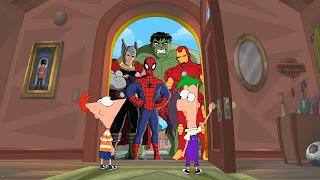 BEWARE THE SPOILERINATOR! This post contains SPOILERS. Read this post at your own risk (you may want to skip the paragraph which begins "Perhaps one of the most surprising...") or don't read it at all until you watch yourself if you want to enjoy Phineas and Ferb: Mission Marvel without knowing what happens in advance!

During the last days of Michael Eisner's reign at Disney, as recounted in James B. Stewart's Disneywar, the questionable track record of the ABC network (an Eisner acquisition) and a hostile takeover attempt by Comcast at the company's lowest point led many to believe that Disney had lost its way; from the beginning, Disney's strength has always been original content and creating memorable stories and characters, not controlling the means of distributing them. There has been one exception to this rule in the past decade, however: Disney Channel, which evolved from a premium network into a basic cable mainstay and for the most part now both defines and cross-promotes the Disney brand to a young audience daily. Eisner's successor Bob Iger seems aware that content - and cross-promotion - has always been king at Disney, adding to the vast library of characters to plaster everywhere for better or worse with the acquisition of character houses that are just as large, most notably Marvel Comics in 2008. Unlike rival DC, whose parent company Time Warner often seems to act as if characters other than Superman or Batman don't exist, Marvel has made quite a name for themselves under the white gloves of the Mouse. The "first phase of the Marvel Cinematic Universe", which spotlighted well-known characters from the Marvel catalog (save for Spider-Man and the X-Men, whose film rights belong to other studios) and made previously second-tier heroes such as Iron Man into household names, began before the Disney acquisition but culminated with both Marvel and Disney reaping the benefits of 2012's The Avengers, teaming up the heroes introduced in the previous Marvel films and becoming the only movie in history not directed by James Cameron to gross over $1 billion worldwide.

Contrary to the fears of those who only-half-jokingly expected the likes of Spider-Mouse or Iron Goof, Disney has thankfully ruled Marvel as a separate fiefdom for the most part. That changes tomorrow, as the Marvel characters are brought to a Disney-owned universe for the first time in perhaps the biggest sort of cross-promotion the FCC will legally allow in an hour-long special episode of one of Disney Channel's most successful animated series (and a frequent subject of this blog), Phineas and Ferb. Perhaps not surprisingly, there have been some naysayers fearing that this represents the worst of what the Marvel characters are able to do now that Disney has their grubby mouseprints on them, but those fears seem to be unfounded for two reasons. The first being that series creators Dan Povenmire and Jeff "Swampy" Marsh and their team (which for this episode included four writers, eight writer/storyboard artists, and four directors) were given strict supervision by Marvel, who inspected the episode and made sure the characters were being used in a manner that wasn't out-of-character and in a way that doesn't violate any pre-existing legal agreements the company has (it took a week for Marvel to figure out whether or not it was legally allowed for a character to say "Howard the Duck" in a throwaway gag, simply because no one had ever done it before). The second is because Phineas and Ferb: Mission Marvel is a ton of fun, which is to be expected from the franchise. Phineas and Ferb always seems to be at its best with its half-hour or hour-long special episodes, and this is up there among the most memorable.

An ordinary day in Danville is usually anything but, and this one is no different. Phineas, Ferb, and their friends are spending it in outer space, as children often do (at least if you're Phineas and Ferb). Dr. Doofenshmirtz is once again trying to take over the tri-state area in the most convoluted way possible, while Perry the Platypus is once again trying to stop him. Doof's failed invention bounces off of the boys's space headquarters, and the next thing you know, Spider-Man, Iron Man, Thor, and the Incredible Hulk are knocking at the door, powerless as a result of the chain of events and hoping Phineas and Ferb can set things straight from the privacy of their underground Secret Hideout for Emergency Defense, or S.H.E.D. for short. (We probably have storyboard artist Josh Pruett, who goes by zombietardis on Twitter, to thank for the S.H.E.D., for whose logic-defying contruction Ferb seems to have borrowed from another well-known fictional Brit. The inspiration is right there in Pruett's username.) Meanwhile, some of the Marvel Universe's villains are envious of Doofenshmirtz being able to defeat the superheroes before they did. However, they soon realize that the inventor of such "evil" gadgets as the oatmeal-to-porridgeinator probably isn't the diabolical mastermind they originally thought him to be, and soon enough even Dr. Doofenshmirtz is part of the unlikely alliance that will hopefully ensure this team of actually competent supervillains doesn't take over the tri-state area before he does. And why is there a familiar-looking platypus flying around?

There's a lot to like about Mission Marvel, especially the interactions between the Phineas and Ferb characters and the Marvel menagerie. The heroes get their powers switched around (leading to an amusing discussion between Thor and Iron Man based on an actual discussion the staff had about what Thor's powers actually entail), one of the gang briefly gets the powers of one of the heroes (and they fit him surprisingly well), the professional-yet-goofy Major Monogram attempts to upstage the much more professional and less goofy Nick Fury, and familiar Ferb running gags end up discovering they have perfect counterparts in the Marvel Universe (M.O.D.O.K., meet Giant Floating Baby Head). I'm not familiar enough with the Marvel mythos to get all of the various references to superhero origins made in the special, but most viewers will probably get at least one of the references to the various previous media incarnations of these heroes, which run the gamut from the recent Avengers movie to the '70s Incredible Hulk TV show. Even the series's mainstay of musical interludes is integrated nicely; neither the heroes or villains sing (which depending on your point of view of the matter is either a good or a bad thing), but we get a goofy pop musical number about Doofenshmirtz's new evil entourage as he commands them to do a bunch of amusingly less-than-evil deeds and a number of rock songs for the various battle sequences. Both the fights and their musical accompaniment are played straight, which seems to be a testament to how the show's writers and head composer Danny Jacob are able to compose in so many genres as well as write action sequences as well as they do comic ones.

Perhaps one of the most surprising - and entertaining - elements of the special is a subplot that creates tension between two characters who are normally played for laughs. Phineas's older sister Candace, who is usually making herself (and everyone else around her) crazy in an attempt to get her brothers in trouble, is revealed to be a Marvel fangirl and thus takes it upon herself to eagerly assist the gang in their mission to recover the superheroes's powers. Unfortunately, as she is in all things, she is a little too eager, and Phineas gets frustrated with her causing more harm than good. Phineas is usually an eternally optimistic character, and it's shocking to see him displaying anger, especially towards his own sister. It's an interesting element to the plot which made me feel sorry for Candace, and leads to a musical number that showcases the voices of Ashley Tisdale and Alyson Stoner, who perform well together (especially given the fact they recorded their parts separately). The reason Stoner's Isabella laments alongside Candace - the fact that none of the female superheroes didn't show up - isn't really touched upon outside of the song; perhaps one of the few weaknesses of the special, but an incentive for the two of them to band together and prove that they can be just as much a part of the team as the boys are - even if it is by the same dumb luck that got Candace in trouble with Phineas in the first place. But then again, that's what she does best.

Mission Marvel may not hit all the marks that the feature-length Across the 2nd Dimension did, but that's a pretty hard accomplishment to top. However, what it does do it does well, and like most of Phineas and Ferb's extra-special romps, has fun with the characters while bringing good comedy, action, and emotion - all while managing to prove that incorporating an ancillary Disney universe is among the impossible accomplishments the boys are able to pull off. Didn't Disney make another big-name purchase last year? Yes, yes they did - and there's already a Phineas and Ferb special in the works to showcase it. Given its premise (a Rosencrantz and Guildenstern are Dead-style take on the original Star Wars where Phineas and Ferb's antics happen just off-screen during Episode IV) and their Marvel-ous Mission, it seems like it will be worth the wait.

PHINEAS AND FERB ©Disney. Marvel characters and elements ©2013 Marvel. SUPER HEROES and SUPER VILLAINS are jointly-owned registered trademarks of Marvel Entertainment LLC and DC Comics, a Time Warner company. No ownership of these properties is intended or should be inferred.
Posted by Ryan W. Mead at 9:24 PM