If It Ain't Wrecked, Don't Fix-It 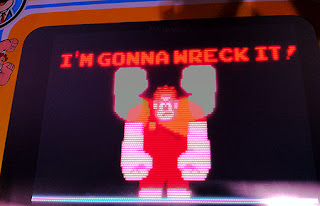 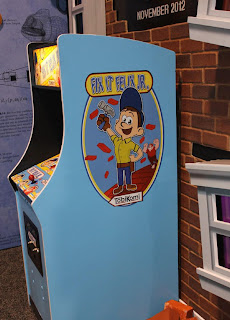 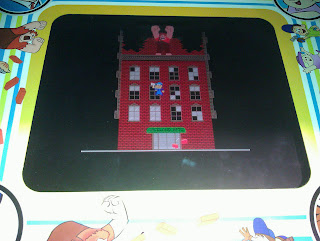 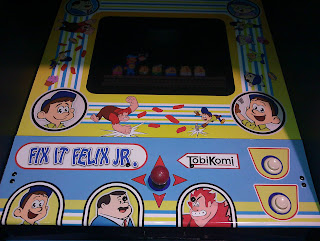 Of course you don't. It doesn't exist. But this mock-up of the game- clearly inspired by Donkey Kong- was on display at the D23 Expo in Anaheim this weekend.

Fix-It Felix Jr. plays an important role in Wreck-It Ralph, a new film from Disney which will be released next fall from director Rich Moore (director of such classic Simpsons and Futurama episodes as "Marge vs. the Monorail", "Cape Feare", and the Emmy-winning "Roswell That Ends Well"). From what I've read, a number of attendees said this was the surprise of the expo, and I'll admit these pictures and the description of the film make me interested even more. 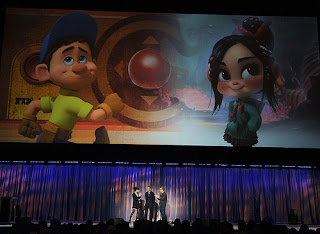 Wreck-It Ralph will apparently do for video games what Toy Story did for toys (or what Roger Rabbit did for cartoons), as the story features pastiches of well-known video game characters and genres interacting with each other. Wreck-It Ralph is the villain of Felix's game, but wants to prove that just because he's a bad guy doesn't mean he's a "bad guy." So he sneaks into other video games, and presumably, chaos ensues. The picture above shows Felix himself (as voiced by Jack McBrayer) and Venelope von Schveetz (voiced by Sarah Silverman), a cute character from a candy-coated racing game- though, as they say, looks can be deceiving. Jane Lynch is also on hand as the star of a Halo-style space combat game.

This looks like a ton of fun, and it's definitely a film that wasn't on my radar before but now is.

WRECK-IT RALPH ©Disney. Felix and Venelope photo by Todd Wawrychuk/Disney D23. "I'm gonna wreck it photo" by Entertainment Weekly. All other photos from animatie.blog.nl. No ownership intended or implied.


Originally posted on my shiny* new Tumblr, Robot and Peanut. (*May not be actually shiny.)
Posted by Ryan W. Mead at 1:00 AM