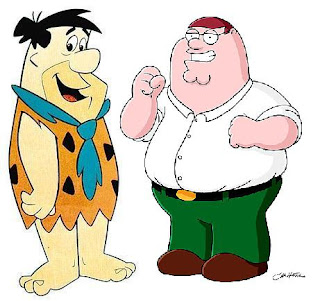 Hey Lois, remember that time that network made a really unusual announcement no one expected them to and everybody talked about it? Well, actually, that's happened a lot, and it happened again today, as Fox announced that they had chiseled out a deal (quite possibly literally) with Warner Bros. for a new co-production reviving The Flintstones, produced by none other than Seth MacFarlane, who has become a hitmaker for the network ever since Family Guy was surprisingly saved from cancellation in 2005. Apparently, negotiations between the two studios were long and convoluted for many reasons, one of them being Warners's trepidations on how MacFarlane would treat Fred and the gang given his series's penchant for pushing the envelope a little too far at times. But in an announcement today at Fox's upfront, MacFarlane said that the culture they live in would be the only thing he'd modernize with the modern stone-age family: "There's no reason to mess with it. You don't want to mess with the Flintstones theme song. The characters, they'll look the same. The only thing that really will change is the stories you're telling. What's the animal version of the iPod? That's the kind of thing we have to think about."

A number of people online (including myself) have, after poking fun at the easily-satirized idea, taken some time to think a little bit more on the idea and whether or not it will work. It's possible it might- for a number of reasons. First of all, though a number of people have mocked the fact that MacFarlane's shows are derivative of each other, a lot of TV shows are. Even MacFarlane seems to know this, quipping in a press release that "America is finally ready for an animated sitcom about a fat, stupid guy with a wife who's too good for him." The Flintstones may have been the precursor to this- in fact, it itself was, depending on how you look at it, a loving parody or a complete ripoff of The Honeymooners. And, just like Family Guy (and The Simpsons, the stepping stone between the two shows), it made fun of the culture of its day- heck, the entire show was basically based on sight gags using animals as replacements for 20th-century conveniences alongside rock-based puns on famous peoples' names.

And it's quite odd in a way to see the animated prime-time sitcom go full circle, as it were. The Flintstones was originally intended for an adult audience, basing its comedy plots on the tried-and-true formula of marital woes and the struggle between the sexes. It was even sponsored by a cigarette company. Eventually, the series became more of a "kids show" as Pebbles and Bamm-Bamm and eventually the notorious Great Gazoo were added to the mix. Since animation is often seen as a childrens' medium, people find it amusing to see old black-and-white ads with Fred and Barney shirking their chores to smoke Winstons behind the house, not realizing that both the subject matter of the ad and the product being pushed were very much in line with the series' original intended audience. Despite the success of the series, it would take television another 30 years before they tried another adult-oriented prime-time animated sitcom*. That, of course, was The Simpsons, which paved the way for more animated series intended for adult audiences, of which Family Guy and its ilk were among the most successful. In fact, Family Guy and The Flintstones are the only two animated series to be nominated for Emmy awards in the sitcom category.

But despite their similarities, the two series are as far apart from each other in terms of humor as the eras in which their characters live, with Family Guy getting its laughs from social commentary mixed with raunchy jokes and take-no-prisoners offensive humor. So is the ringleader of the Quahog crew the right man for the job to bring the Bedrock bunch back? Oddly enough, he very well might be if he does it right. MacFarlane is apparently a Flintstones buff (and for that matter, got his start at Hanna-Barbera), so if he and his team (which also includes Dan Palladino, a fellow Family Guy vet and husband of Gilmore Girls creator Amy Sherman-Palladino) take care of these characters, it's possible that they'll be able to come up with something fresh that's still true to the spirit of the characters...much like, say, The Looney Tunes Show, whose balance (and naysayers, of which this project has just as many) I've already covered. If done right, it's possible this series could be something along the lines of the TV-movie from a few years back The Flintstones On The Rocks: something which brings the characters back to their roots with just a little bit of risqué humor as opposed to the over-the-top raunch that MacFarlane has made his stock in trade. This project could go any which way, and I'll be interested to see what happens when it debuts in 2013.

*ADDENDUM: Twitter Secret Circle member Ukari Bakosi points out an adult-oriented animated series which aired between The Flintstones and The Simpsons: another Hanna-Barbera series from the '70s, Wait 'Til Your Father Gets Home. I had forgotten all about its existence, but even if I had remembered it I probably wouldn't have brought it up, as The Simpsons, Family Guy and their ilk owe much more to The Flintstones than Father (which mainly seems to be an attempt to tackle the controversial topical humor the then-popular All in the Family did in an attempt to duplicate its success).