Queens for a Day


Let me tell you a little bit about the latest chapter of the Travels of Ryan. Yesterday, I went to New York City as I often do, this time to the Museum of the Moving Image in Queens to celebrate Jim Henson's 75th birthday.

I took the subway from Times Square to Queens. When I got to Queens, it was very interesting to see, as I had never been there before. It looks somewhat like New York, but at the same time it doesn't, as there are no big skyscrapers or anything. It looks like a regular town, almost. I made my way to the museum and waited for one of my online friends, Dana from The Dragyn's Lair, to come. This was my first time meeting her in person, and she had brought one of her friends, Alison, along as well. It was very nice to meet them.

The highlight of the day- both for the celebration of Henson's birthday and for me personally- was the screening of a compilation film called "Muppet Music Moments." The screening was introduced by Craig Shemin of the Jim Henson Legacy, who introduced the guest of honor, Larry Grossman (the musical director for the first three seasons of The Muppet Show) by showing an old clip of the first project he did with Henson, a sketch from "The Jimmy Dean Show" with Rowlf acting opposite Dean. It was a very funny sketch as Henson as Rowlf was particularly hammy, and the audience got a real kick out of it. Grossman introduced the film by commenting about what it was like to work with Jim Henson, commenting that Henson himself came up with most of the ideas for the musical numbers himself or at least assisted in them. Then, the compilation film was shown, which featured a collection of musical numbers from The Muppet Show. The audience seemed to enjoy it as well, as there were a lot of great moments chosen. (I certainly did). "Mahna Mahna" and Beaker, Animal, and the Swedish Chef as the Leprechaun Brothers are always favorites and the audience seemed to love them, as well as the bizarre Marvin Suggs and his Muppephone. The audience also seemed to get a big kick out of Miss Piggy being her usual self opposite Paul Simon and Elton John, a vaudeville number starring Statler and Waldorf (with Fozzie taking their place in the balcony heckling them), Animal upstaging Rita Moreno on drums while she sings "Fever", a routine with Kermit hallucinating his doctor turning into a witch doctor while singing "Coconut", and two Village People-themed numbers starring pigs. (The "Macho Man" routine has a gang of biker pigs being fought off by Gonzo and his gang of chickens. At one point, Gonzo throws a chicken from a clothesline and knocks it into a pig- I think Gonzo invented Angry Birds!) I kind of got goosebumps (or some sort of joyful feeling) seeing the Muppet Show opening on the big screen, as well as from some of the more touching numbers, such as Kermit's signature song "Rainbow Connection" (performed here alongside Debby Harry of Blondie), "Just One Person" as sung by Bernadette Peters, and Harry Belafonte's "Turn the World Around", an African-themed number whose theme reminded me of "Circle of Life".

Afterwards, Grossman answered questions from the audience about what it was like to work with Jim Henson on the music for the show. Shemin's wife, Stephanie D'Abruzzo (a puppeteer for Sesame Street and Avenue Q), worked as a "Vanna White" as it were, handing out items that were lying around the Henson archives as gifts for the people who asked questions, including a cast T-shirt for season 32 of Sesame Street. (It's starting its 42nd this week, so you can tell how long they were lying around.) Grossman told some interesting and funny stories, including about how The Muppet Show was produced in the UK after all three networks turned it down. Henson commuted from New York to London via Concorde, and Grossman believes that had the show not been produced abroad, it would not have been as good, as it probably would have cost more to produce it stateside what with union labor and all. He also pointed out that the US and UK had different senses of humor, but tried to make the show appeal to both of them in terms of comedy and music selection. The same 10-piece band was used for all five seasons of the show. Grossman pointed out that one day, Henson was snowed in for a weekend at JFK, and he passed the time by writing the first draft for The Dark Crystal. There were also a few other interesting stories he told, about having to go through all five hours of Tchiakovsky's Swan Lake to find a particular piece from it for Rudolf Nureyev (who was incredibly happy when they found it), and the fact that the staff of the hotel in London where they would rehearse with the guest stars was always giddy with anticipation to discover who the next guest would be and get their autograph. Bonnie Erickson, the designer of Miss Piggy and Statler and Waldorf (as well as the Phillie Phanatic), was also there, and said a few words about how Miss Piggy evolved and became an icon- she joked that Piggy herself was probably the only one who expected her to become one.

Afterwards, I said goodbye to my friends and explored the rest of the museum. I saw a short film by Jim Henson called "Time Piece", which was an interesting experimental film in which Jim Henson himself stars, using some unusual visuals to tell a story of the average life of work, sex, money, and death. It's a really bizarre yet interesting film. The Henson exhibit itself was interesting, as there were various sketches from Henson on display as well as actual Muppets. Many of the things I had seen before in books and such, but there was some stuff I hadn't seen. One of the puppets- a king for an unsold pilot- was incredibly large. I was surprised at how large some of the hand puppets were. I also got a kick out of a reel of some of the early commercials Jim Henson did, and the other guests seemed to as well, especially the La Choy dragon (a big dragon character whose full-body costume was later used as the inspiration for Big Bird) and an ad for Muppet dolls in which a group of Kermits chant the bizarre slogan, "Oh buy us oh buy us oh buy us we beg! If you do not buy us, we will bite you in the leg!" The reel also had a vintage interview where Henson was pointing out the earliest commercials he did were sponsor tags for coffee and such which were only eight seconds long. These tags have gotten a second life on YouTube, so I think it's easy to see that he was able to make them funny even with such a small amount of time granted for them. Photography was not allowed in the Henson exhibit, so I will link this article so you can see a sample of what was on display.

Then, I explored the permanent collection of the museum, which had samples of the various aspects of the visual arts and what goes into making them, including scripts, costumes, makeup, and merchandising. The visual form of video games was also represented with some classic arcade games, an Atari 2600, and a NES, all of which the guests seemed to enjoy. My personal favorite part of the permanent collection was an artwork called "Tut's Fever", an actual working movie theater which is designed in part to look like an old-fashioned "movie palace" such as Grauman's Chinese in Hollywood but also as a tribute/parody to ancient Egyptian stereotypes such as mummies, hieroglyphics, etc. The walls are all made to look like ancient Egyptian hieroglyphics, except the figures are old-time movie icons such as the Marx Brothers, Walt Disney, Cecil B. DeMille, and others.

All in all, it was a very fun day.

Here are some photos of Tut's Fever: 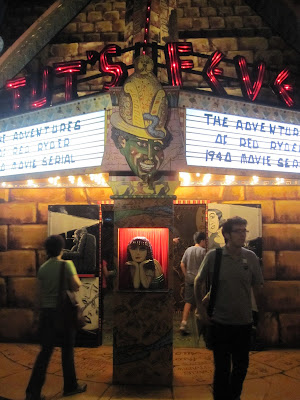 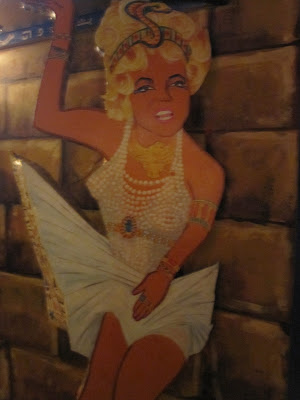 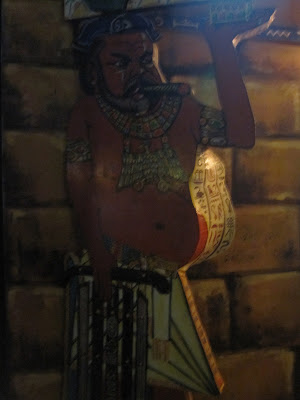 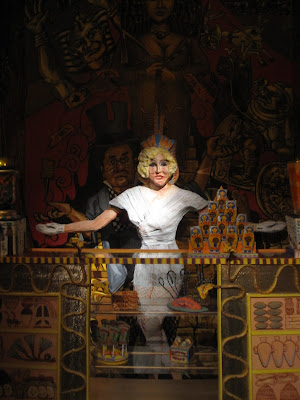 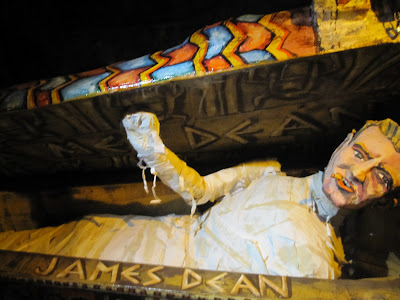 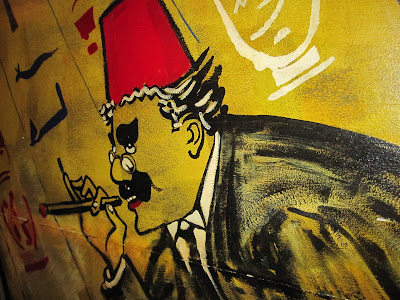 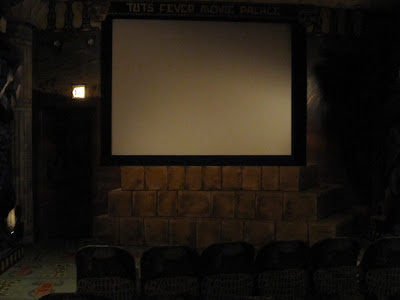 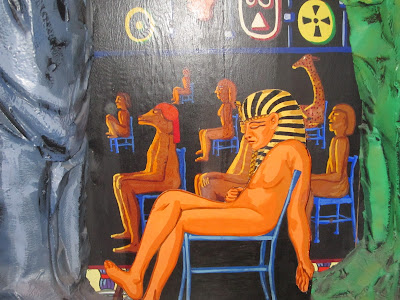