Two Guys, A Girl, and a Platypus 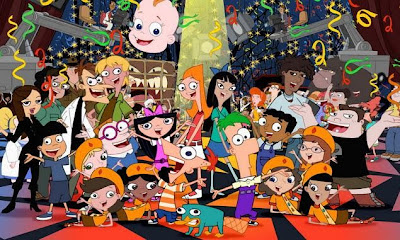 I've talked about Phineas and Ferb so many times here that...well, that the Kevin Bacon joke is getting old, but now that I've decided to explain why I like it so much as part of Speak Out With Your Geek Out, the actual challenge occurs. How do I explain the show for those who may not have seen it, and why is it my "geek passion" right now as it were? And aren't I a little old to be watching this, anyway?

Well, if you're familiar with Phineas and Ferb, you'll know the answer to the last question is, "yes, yes I am." As for the rest...well, I might as well try.

Phineas and Ferb is an animated series which debuted on the Disney Channel in 2008 after a few preview screenings in 2007. It is also by far the only watchable show on the Disney Channel. Unlike the cheesy sitcoms of the Hannah Montana ilk, Phineas and Ferb is actually written with both kids and adults in mind and features memorable characters, all sorts of humor styles, platypus-related slapstick, and catchy original songs. It uses all sorts of humor- funny dialogue, sight gags, slapstick, running gags, pop culture references, funny music, lowbrow humor (but never too prominently and usually always comically), and just plain insane stuff- and excels with all of them and mixing all of them as well. I can't think of many other shows on TV right now- animated or otherwise- that do it as well as Phineas and Ferb does.

This is probably due to its clever writing team, which includes a number of veterans from The Simpsons, Family Guy, and Rocko's Modern Life, including series creators (and voice actors) Dan Povenmire & Jeff "Swampy" Marsh. Povenmire was by Seth MacFarlane's own admission one of Family Guy's best animation directors, and he and Marsh met on Rocko, where besides writing and/or directing some of the most memorable episodes, including "Zanzibar!" and (my personal favorite) "Wacky Delly", they came up with a concept for a cartoon show of their own which was so out there, every network turned it down until Disney took a risk nearly 15 years later, asking for a number of changes- all of which Povenmire and Marsh refused. The result is the show you're reading about right now.

Practically every episode of Phineas and Ferb has the same basic setup- the titular stepbrothers, the idea man Phineas and the usually-silent builder Ferb, come up with some extravagant way to spend one of their "104 days of summer vacation", be it building a rollercoaster, traveling through time, discovering the lost city of Atlantis- you know, things of that nature. Their older sister Candace attempts to "bust her brothers" by telling her mom what they're doing, ostensibly to prove she's responsible, though mainly it seems she's trying to do it just to prove to herself that she can- especially since for some reason, whatever they're working on that day always seems to mysterious disappear at the exact moment she gets her mother's attention. At the same time all of this is going on, the boys' pet platypus, Perry, has gone off on his daily duty, as he is actually a secret agent whose daily mission is to stop the latest "evil" scheme hatched by Dr. Heinz Doofenshmirtz, an incredibly pathetic would-be evil scientist who is more intent on conquering the tri-state area rather than the world and whose plans usually involve making up for some sort of emotionally scarring incident from his childhood. Once destroyed, the invention that Doofenshmirtz is working on just so happens to get rid of whatever Phineas and Ferb are working on that day. (Not that they mind, unlike Candace- they don't need to clean anything up.)

I was just listening to a podcast which compared the setup and the way it plays out to the "Aristocrats" joke, which is both a very brilliant comparison and an apt one- the setup is always the same, but the real humor comes from what happens in between. It's like a Road Runner cartoon- we know Wile E. Coyote's invention is going to fail. It's seeing how it's going to fail where the fun comes in. For that matter, there are a bunch of running gags and situations that keep popping up, and the writers are aware of not only these, but the basic formula of the series as well, always tweaking and bending the formula for its maximum humor potential.

Besides having great talent both behind the scenes and in its voice cast (running the gamut from Disney Channel mainstays to well-known celebrities to great guest stars to the series's own creators, including Dan Povenmire as Dr. Doofenshmirtz, who never fails to steal the show), the tri-state area is populated with a bunch of memorable characters. Phineas and Ferb themselves more often than not work as a plot setting rather than its main drive, allowing the memorable cast of characters to take center stage. And it's a group of characters that perhaps rivals the Simpsons' town of Springfield in both number and personality, including not only the aformentioned Candace and Dr. Doofenshmirtz (my two personal favorites), but also Doofenshmirtz's extended family (including his ex-wife, sullen teenage daughter, and a hilarious giant robot who looks and talks like a stereotypical 1950s husband), Phineas and Ferb's next-door neighbor who is smitten with Phineas (not that he's aware of it) and leads a troop of literally-do-anything girl scouts, Agent P's boss and his eager assistant whose interactions with the major usually lead to embarrassment, a hair-metal band called Love Handel, and some bizarre, inexplicable recurring characters, including a giant floating baby head and a hallucinatory zebra who calls people "Kevin."

And if that wasn't enough, almost every episode has at least one original song. Povenmire and Marsh have always loved writing songs on the series they've worked on- in part because, as they've joked, it's their attempt at animated immortality. And Phineas and Ferb is pretty much guaranteeing it, as the songs they and the talented writing staff have written for the series run the gamut from practically every genre you can imagine, mixing the catchy music with memorable and often comical lyrics like "science can't improve upon a mother's heart, but given time it can trick out her spleen" and "like a ninja of love rappelling down from above, you snuck your way right into my heart."

Phineas and Ferb is getting to the point that it can truly be called what the New York Times did last year- "The New SpongeBob"- in terms of both popularity and merchandisability. The only sure way you can tell if you'll like it (and you probably will) is to take a look at it. So, in honor of Speak Out with Your Geek Out week, I'm giving those of you who may not have seen it a taste with an appropriate episode for the occasion, "Nerds of a Feather", in which our heroes find themselves in the middle of the ultimate genre-war at a comic convention. Besides its nerdy references, a fun twist on the Doofenshmirtz subplot, and guest appearances by Kevin Smith and Povenmire's old boss Seth MacFarlane mixed in to the typical Phineas and Ferb style of humor, it has a couple of lessons that I think really sum up this event and what it's meant to promote- embrace your geekiness. Share your geek passions with others rather than fighting over them. And, as Candace shows, don't be afraid to flout your inner geek, no matter how embarrassing your passion may be. Because you're probably not as neurotic as Candace is, so you have nothing to lose.

A true jack of all trades and master of none, Ryan W. Mead has enchanted and/or annoyed tens of people with his random observations, jokes, and interests in various realms, specifically the goings-on and history of the entertainment and animation industries. When he's not moonlighting in his secret identity as a mild-mannered grocery clerk, he can be found sharing and discussing his random thoughts on such things on Twitter, Robot and Peanut, and Mostly From Sugar Packets (the latter of which you are most likely reading now). As far as Phineas and Ferb is concerned, he serves as the co-editor of the Phineas and Ferb Wiki Twitter feed and Facebook page, has done a few guest posts on the subject for Disney blog The Dragyn's Lair, and also recently appeared as a guest on the GeekCast Radio Network to discuss the recent telefilm Phineas and Ferb: Across the 2nd Dimension.

This post is a contribution to Speak Out with Your Geek Out, a week-long celebration of all things geeky where bloggers share their passions in order to foster geek pride and combat recent negative stereotypes of personal nerdy passions.


Portions of this post were previously posted on Mostly from Sugar Packets and elsewhere online in a slightly modified form.


PHINEAS AND FERB ©Disney. No ownership intended or implied.


NEXT WEEK: An interview with Phineas and Ferb writer/animator Aliki Grafft!
Posted by Ryan W. Mead at 4:08 AM