Muppet Month: The Making of The Muppets, Part 1 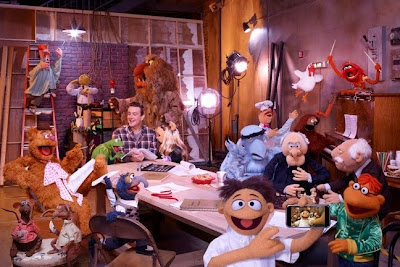 “We’re here to sing, dance, make people laugh and somehow, just maybe, make the world a little bit better place. That may sound silly, especially coming from a frog. But the Muppets have always tried to inspire the world with silliness and to show folks that no matter who you are or how weird you seem to others, there’s a place for you and people who care about you. And when you find that place and meet those people, wonderful things happen.” —Kermit the Frog


He’s green. He has crazy friends, flippers, a penchant for pigs…and one of the most recognizable singing voices since the King. And he’s coming to neighborhoods everywhere for the holidays. Kermit the Frog is back on the big screen, and this time, he’s teaming up with Jason Segel, Amy Adams, Chris Cooper and newcomer Walter, plus the whole Muppet gang, for a brand-new, big-screen adventure in Disney’s “The Muppets.”


“It’s funny, upbeat and full of laughs for everyone…frogs, pigs, bears…even people,” says Kermit. “For new fans, it’s a chance to see the Muppets in action on the big screen. And for old fans it’s a chance to get together with old friends…and get a little crazy together.”


Muppet fans span the globe. So it makes sense that Disney’s “The Muppets” was ignited by a Muppet fan. “It started when I was a kid,” says Jason Segel. “The Muppets were my first comic influence and I was in love with puppetry. I just thought it was an amazing art form.” “All comedy writers are Muppet fans,” adds Nicholas Stoller. “It’s the gateway to comedy. It’s like the first thing you try and then you slowly fall down the rabbit hole of comedy.” A film Segel and Stoller previously collaborated on actually set things in motion, says Segel. “We ended ‘Forgetting Sarah Marshall’ with a lavish puppet musical, and The Jim Henson Company designed the puppets. Something started growing in my belly, and Nick and I came up with this idea and pitched it to Disney. Disney liked the idea so we wrote the script.”


Enter producers David Hoberman and Todd Lieberman—each with their own affinity to all things Muppets. “I think there's always been a timeless quality to the Muppets,” says Hoberman, who cites the Muppets’ recent online smash viral video “Bohemian Rhapsody.” “These characters are as contemporary today as they were when Henson first brought them to life. I think people of all ages will respond to them on the big screen.” While president of the motion picture group at The Walt Disney Studios, Hoberman was behind releases like “The Muppet Christmas Carol” and “Muppet Treasure Island.” Meanwhile, Lieberman’s appreciation for the franchise grew from personal experience. “I have always been a big Muppet fan,” says Lieberman. “There’s clearly a nostalgic love. The characters are just inherently lovable and I’m thrilled that we’re bringing them together again in this movie. It’s been beautiful introducing them to my own children.”


And that’s a good thing, says director James Bobin. Disney’s “The Muppets” will welcome a whole new generation into the world of the Muppets, and Bobin can attest to the positive influence these characters can have on young audiences. “I watched the Muppets at a very early age in England, and they have significantly influenced my sense of humor and what I find funny.” Segel says it’s the Muppets’ sense of humor that differentiates them. “Modern comedy makes jokes at other people’s expense,” says the actor, writer and executive producer. “The Muppets never make fun of anybody. They’re all about being good and nice and trying to make the world a better place. It’s easy to get a laugh out of making fun of somebody, but the Muppets never relied on that.”


Influenced by their affinity for Muppet mayhem, filmmakers introduced a central character who’s driven by his lifelong love of the Muppets. According to Jason Segel, Walter’s wildest fantasy is to meet the Muppets. “Walter is naive, sweet, innocent, wide-eyed—he’s very much like Kermit before Kermit became famous,” says Segel. “But he just wants to belong. He’s looking for a family, really. The Muppets are the only people he’s ever seen who were like him, so his quest is to become one of the Muppets.” Adds Walter, who is as big a Muppet fan in real life as his character is, “I start out just wanting to meet the Muppets but then have to help Kermit get the gang back together to save Muppet Studios. It’s the role of my lifetime. In fact, it is my life.”


The movie opens in Smalltown, USA, home to Walter, brother Gary and his girlfriend, Mary. It’s the kind of town where people smile a lot, give apples to teachers and break into song—just because. But the trio leaves the safety of Smalltown behind for a long-awaited trip to Hollywood—and an opportunity to visit Muppet Studios at last. While there Walter overhears the evil plan of nefarious oil baron Tex Richman and finds himself navigating a long-awaited, never-imagined, can’t-believe-it’s-really-happening-to-me Muppet reunion. It’s not long before the world’s biggest Muppet fan is face to face with the heart of the Muppets—Kermit the Frog. “Kermit is my all-time hero,” says Walter. “I have his poster in my room, I’ve seen everything he has ever done and meeting him was the greatest moment of my life.” Says Kermit, “Walter gets so excited being around the Muppets. I’ve never met anyone like him…except maybe Jason Segel.”


Segel can certainly relate to Walter’s enthusiasm, but his character, Gary, shows a little too much interest in his brother’s Muppet dreams. His girlfriend Mary has her own California dreams, it turns out, and is secretly hoping for a marriage proposal during their vacation. But she is a team player and willingly jumps on board to help reunite the Muppets and save the studio. They track down Kermit and learn that he’s lived a quiet life since the Muppets last performed together. It takes some convincing to get the now low-key frog to agree to the plan, but once Kermit realizes just how much he misses his friends, it’s “go” time.


“They embark on a huge journey around the world to find the rest of the Muppets who have gone their separate ways,” says Bobin. “The first Muppet they find is Fozzie, who’s performing with a Muppet tribute band called the Moopets. The Moopets are cynical characters who are taking advantage of the Muppets’ legacy. They sing tacky versions of their songs and sadly, Fozzie is the only real Muppet who joined up with them. He’s in a tribute band of his own group. It doesn’t take too much persuading to get Fozzie to come along for the ride.” Next up is Gonzo, who has left show business behind in favor of his first career choice: plumbing. He is to plumbing what Tex Richman is to oil—minus the evil-villain part. But Gonzo’s plumbing empire is no match for the lure of the stage, and he soon agrees to return to Muppet Studios and his daredevil act.


Perhaps the trickiest piece to the Muppet reunion is Miss Piggy, who’s landed a posh gig in France as plus-size editor of Vogue Paris. She’s enjoying the big life and doesn’t exactly dream of reuniting with the Muppets—unless, of course, it’s Kermie who’s asking. But it’s not all romance between them, says Miss Piggy. “The scene where Kermie begs me to come back to Hollywood with him is the funniest scene in the movie,” she says. “I’m hilarious, and the frog isn’t half bad either.” Back together at last, the Muppets must put together the best show of their lives—no small feat considering their past efforts. And it’s been years since they last performed—rusty doesn’t begin to describe their acts. Can they break through the obstacles and create a show of a lifetime? Can they convince a network to broadcast the show? Will they raise enough money to silence Tex Richman once and for all—or will he foil their efforts and destroy the studio despite everything? “Well, see the movie and find out for yourself!” says Miss Piggy. “Moi can’t do everything.”


This post utilizes promotional material provided by Disney. I am not being compensated in any way for my opinions and/or promotions, and any opinions given in this post are solely mine.

THE MUPPETS ©Disney. No ownership intended or implied. Photo by Andrew MacPherson/Disney
Posted by Ryan W. Mead at 8:19 AM