Muppet Month: Intro and History of the Muppets 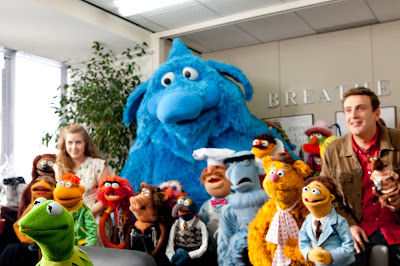 If you haven't figured it out by now, there's a new movie coming out starring the Muppets. This film is getting a lot of publicity- sponsored and otherwise- as Disney is really trying hard to make sure Kermit and company's comeback is a successful one. Seeing as everyone seems to be promoting this film one way or another, I figured I'd join in the fun with something I like to call Muppet Month. Because it's a month of Muppets. And alliterative.

Every day in November (or at least most days, seeing as I've already missed two and, giving my legendary non-existent on-timieness, I'll probably miss more), we'll take a look at both the past and future of the Muppets. Every day, I'll alternate between some of the press material Disney has released for the film and an original look at the past of the Muppets. So, let's play the music and light the lights and do all those other things.

A HISTORY OF THE MUPPETS
(provided by Disney)


Since “The Muppet Show” began in 1976, the Muppets have been embraced by audiences worldwide. What began with a single appearance from an unknown frog puppet became a global phenomenon that is still going strong 35 years later.

Early Muppet appearances date back to the mid-1950s, when a primitive version of Kermit the Frog began the American sensation by appearing on “Afternoon, Footlight Theater” and “Sam and Friends” in 1955. A year later, a revised version of Kermit appeared on national television on “The Steve Allen Show.”

Later, Rowlf the Dog was created for a Purina Dog Chow ad in 1962 and then began making regular appearances on “The Jimmy Dean Show” in 1963. Gonzo was next with his first appearance in “The Great Santa Claus Switch” as the “Cigar Box Frackle” in 1970, later appearing as the Gonzo we know today on “The Muppet Show” in 1976.

Throughout the 1960s, Muppets also made appearances on dozens of nationally broadcast variety shows including “The Ed Sullivan Show.” Their first international exposure came on Canadian television with the airing of the special “Hey Cinderella!” in 1970. By 1971, the Muppets could be seen on U.K. variety shows, such as those hosted by Tom Jones and Julie Andrews, before making their way to Germany for “The Peter Alexander Show” in 1975.

The first pilot of what would become “The Muppet Show” aired on January 30,1974, and was titled “The Muppets Valentine Show.” After that the characters of Fozzie Bear, Statler & Waldorf, Sam Eagle, Swedish Chef and The Electric Mayhem Band (featuring Dr. Teeth, Animal, Janice, Floyd and Zoot) were created for the second original pilot titled “The Muppet Show: Sex and Violence.” The show aired on March 19, 1975, and contrary to the scandalous name, the premise of “The Muppet Show: Sex and Violence” was to parody the rise of sex and violence on television with the Muppets performing a pageant based on the seven deadly sins. “The Muppet Show” as we know it officially began in 1976 and was well-received internationally, going on to broadcast in more than 100 countries. The show was in first-run syndication from 1976-1981 on CBS affiliates domestically as well as numerous outlets globally. At its peak “The Muppet Show” was seen by more than 235 million people.

During its run “The Muppet Show” received countless awards, including three Emmys®, and featured guest appearances from the most prominent actors, musicians and public figures of its time. “To me, ‘The Muppet Show’ in that era was a little bit like ‘American Idol’ of the current era,” says executive producer Martin G. Baker. “The day after a new episode, everyone was talking about ‘The Muppet Show.’ It was front-page news: Who was the guest star this week? Who’s coming up next week? It was one of those things everybody talked about.”

After 1981, “The Muppet Show” was repackaged for syndication, airing on various networks, including TNT from 1988-1992, Nickelodeon from 1994-1999 and Odyssey from 1999-2000. With the success of “The Muppet Show,” the Muppets branched out to the big screen, releasing their first feature film, “The Muppet Movie,” in 1979. The film starred a myriad of actors, including Bob Hope, Cloris Leachman, Steve Martin, Mel Brooks, Richard Pryor and Paul Williams. This impressive list of celebrity cast and cameos became the hallmark of all Muppet films, five of which followed, including “The Great Muppet Caper” (1981), “The Muppets Take Manhattan” (1984), “The Muppet Christmas Carol” (1992), “Muppet Treasure Island” (1996) and “Muppets From Space” (1999). All six films have signature soundtracks that received countless awards, including an Academy Award® nomination for Best Song for “Rainbow Connection” and Best Original Score for “The Muppet Movie.”

In addition to feature films, Muppet mania continued long after “The Muppet Show” went off the air. Many television specials and documentaries featuring the classic Muppet characters have been produced, as well as arena shows of both “The Muppet Show” and “Muppet Babies,” which toured domestically from 1984-1989. Muppet Magazine was published from 1983-1988 and “The Muppets” comic strip was syndicated in U.S. newspapers from the early to mid 1980s. Museum exhibits (“The Art of The Muppets,” “The World of Jim Henson: Muppets, Monsters & Magic,” “The Vision of Jim Henson” and others) featuring Muppet characters toured domestically and internationally from 1980-2001.

Multiple record albums for “The Muppet Show,” “Muppet Babies” and all of the Muppet movies have been released worldwide. Hundreds of Muppet books have also been published around the world since 1976.

Throughout the years the Muppets have also produced numerous public service announcements and have acted as spokespeople for many causes both domestically and internationally, ranging from The National Wildlife Federation, UNICEF and the American Film Institute, to the University of Maryland, the American Library Association and the Better World Society. Kermit regularly appears as a giant balloon in the Macy’s Thanksgiving Day parade in New York City.

“The Muppets are just your average, everyday dysfunctional family: loud, crazy, odd, silly…total chaos all the time. But that’s okay, because when you get right down to it, we really do care about each other. We believe in each other, and we help make all our dreams come true. And that’s what really matters. Besides, I kinda like weird.” —Kermit the Frog

This post utilizes promotional material provided by Disney. I am not being compensated in any way for my opinions and/or promotions, and any opinions given in this post are solely mine.

THE MUPPETS ©Disney. No ownership intended or implied. EMMY® is a registered trademark of ATAS/NATAS. Photo by Patrick Wymore/Disney
Posted by Ryan W. Mead at 10:50 AM