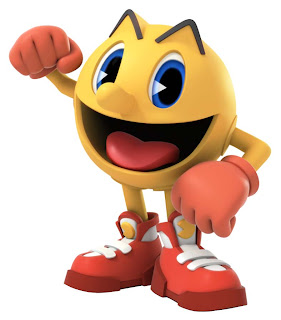 I’m not sure if anyone was clamoring for a stereoscopic 3D CGI cartoon from the creator of Animaniacs and the former head of Marvel Comics about Pac-Man as a teenager, but we’re getting one anyway. In a bizarre news announcement (but, then again, a good portion of the news to come out of the entertainment industry is quite bizarre), Namco Bandai announced that it sold the U.S. rights to their new Pac-Man cartoon to Disney XD. Set to premiere in the fall of 2013, Pac-Man: The Adventure Begins comes from producer Avi Arad and writers Tom Ruegger and Paul Rugg. This thing has actually been in development since 2010, and at E3 that year, Namco Bandai showed a preview clip. Based on the promo photos and such, it seems that the series won't be too far off from what this original preview showed...

(The reason the video is blurry is because it's was meant to be viewed at the E3 event itself with those newfangled non-red-and-blue 3D glasses; this could very well be the first stereoscopic 3D series in television history.)

So, what are we dealing with here? Basically, we have an origin story which also tries to create a backstory for Pac-Man. Pac-Man, who is apparently a laid-back, gluttonous high-schooler, becomes an unlikely hero as he is forced to save the Pac-world from the wrath of the ghosts, who are apparently the actual ghosts of an invading army who failed to invade the Pac-world before but are somehow able to now as ghosts are something. He does this, of course, with the help of the power pellets, and this makes it seem even more likely that power pellets are actually drugs of some sort.

For that matter, some of what Arad said about his plans for the show back in 2010, combined with what's shown here, make it seem even more bizarre, like the countless fan fictions I've seen that try to tell a serious story with children's cartoon characters, or that Simpsons line about "a realistic down-to-earth show that's completely off the wall and swarming with magic robots." (Then again, Rugg's most recent writing credits include Scooby-Doo! Mystery Incorporated, which is pretty much that Simpsons quote personified.) "We feel we have a unique opportunity to have an action adventure, human interest story. As a filmmaker, it's a unique opportunity to get to know the characters you play...We don't know what happened to Pac-Man's parents. He's the only yellow one in Pac-Land; what does that mean? Is it a social statement? We'll find out."

At this point in time, it's too soon to tell whether or not this thing will work. There's definitely some potential; as I said before, it seems to know how bizarre the premise is and not take itself seriously. The casting of Pac-Man as a reluctant hero is also an interesting one- it's the sort of Peter Parker "with great power" thrust-upon-him-unexpectedly thing that's been done time and again, but given how little story Pac-Man has to begin with, it's at least some sort of plausible story that you can gleam from the source material. At the same time, however, some of that grandiosity- and Arad's suggestions that it may be even more so- make the idea seem even more unusual than it already is. Whatever happens, I'll be keeping an intrigued eye on this project as it gets closer to air date. If there's one thing we can all be assured of, it's that it will at least be better than the Hanna-Barbera Pac-Man cartoon.

I just wonder what Billy Mitchell thinks about all this.