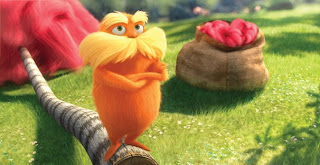 So sue me, I liked The Lorax. Well, most of it anyway. It was cute, it was entertaining, it was funny, the songs were catchy, there were some funny jokes (even if a few of them were along the lines of, say, fish singing the Mission Impossible theme- which I'll admit I laughed at- and Ed Helms imitating the Swedish Chef). The bizarre questions that come when you analyze what it took to extend the story to feature-length (If the Lorax was magic, why didn't he just use his magic to stop the Once-ler? I understand him and the animals taking over the Once-ler's house in a sort of "Occupy Thneed" protesty thing, but did they actually like living there more instead of the forest? Did Betty White really need another paycheck?) are overshadowed by the enjoyable story of environmentalism vs. commercialism wrapped within a parallel, very similar story of environmentalism vs. commercialism.

Until the last act of the film when the Lorax's story is finished and the movie somehow becomes a chase scene involving Ted and Audrey (ha ha, I see what you did there, movie) protecting the last truffula tree from the evil air businessman or something.

I understand you have to pad a story of such short length to get it to a certain longer length. Hell, even Chuck Jones had to put a comic action sequence in the middle of How the Grinch Stole Christmas to get it to 30 minutes minus commercials (and nowadays commercials minus the already-short short to the point where they have to rhyme "hoss" with "stunk"). But he didn't spend an entire reel doing it.

Chase sequence aside, it's a fun film and not as much a travesty to the source material as, say, The Cat in the Hat. Horton Hears A Who! remains the best feature based on a Seuss book, but this is a close second.

On my scale, I give it a Recommended. I think stars are subjective and pointless, but if I had to, I'd give it 2 and 4/5 out of 4 stars- one point has been knocked off the third star for that last-act chase.

(As an aside, one of the most amusing things in the film isn't intentionally amusing- or at least I don't think it is. The song the Once-ler sings about the greed and excess of his growing business at the expense of the forest, including a remark about PR people lying for his gain paired with a visual of the Lorax being thrown a thneed in surprise which becomes a "Lorax approved!" billboard photo op, could just as easily have been sung by the studio heads who approved, say, a "truffula-tree-friendly" Lorax that's "the sort of car the Lorax would drive." Not since WALL-E have I seen such commercialization of a film with an anti-commercial message- and this one is unintentionally aware of it! The irony's so thick you could cut down a truffula tree with it.)