"One day, at the scene of a fire, the cop found the perfect fireman axe. That was the day he became Axe Cop." Thus began the adventures of one Axey Smartist, better known as Axe Cop. As an axe cop, Axe Cop does the things that axe cops do- namely, chop bad guys's heads off. He is assisted in this by Ghost Cop (formerly Uni-Avocado Soldier, formerly Avocado Soldier, formerly Dinosaur Solider, formerly Flute Cop) and a team of superheroes including Sockarang, Baby Man, The Wrestler, and Mr. Stocker (whose superpower is that he has no superpowers whatsoever.)

If this sounds like it was written by a six-year-old...it was. Cartoonist Ethan Nicolle came up with the idea for Axe Cop...let me rephrase that. Writer Malachai Nicolle, then age five, came up with the idea for Axe Cop while playing with his older brother, cartoonist Ethan Nicolle, declaring himself to be "Axe Cop" and Ethan to be "Flute Cop." The resulting conversation so amused Ethan that he decided to make it into a comic for the amusement of his relations and Facebook friends. When Axe Cop launched as a website in early 2010, he soon caught the attention of the Internet at large. The Nicolles have been in talks with Adult Swim and Dark Horse Comics will soon be publishing the first published Axe Cop compliation. It's clear that everyone loves Axe Cop- although Axe Cop himself is so busy that he has no time for love. Do you know what time his job is? Always. He works the always shift. 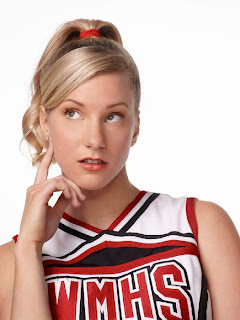 Perhaps personifying the stereotype of "dumb blonde" far better than any fictional character before her, Brittany S. Pierce believes the square root of four is rainbows, finds recipes confusing, rinses her mouth with Dr Pepper because she believes him to be a dentist, and is pretty sure her cat is reading her diary. Despite this, she has slept with practically everything that moves (and quite possibly a few things that don't) at William McKinley High School- most likely because she happens to be an attractive cheerleader who is also a talented dancer, specializing in "hairography," or, as she refers to it, "cool epilepsy." Although she is generally liked (or at least tolerated) by her fellow glee club members and teacher, Will Schuester (who taught her the second half of the alphabet, something she thought she would never achieve after giving up due to the similarities of the letters "M" and "N"), her best friend and closest confidant is fellow Cheerio Santana Lopez, who by some definitions she may be dating.

Aptly dubbed by one news article as "The Ralph Wiggum of Glee," the character portrayed by Heather Morris evolved in the second half of the first season from a simple background character to a minor character who could often deliver the funniest line of the show. We have Morris herself- who ad-libs a number of Brittanyisms- to thank for this, as it was her blank expression on the set one day that made series creator Ryan Murphy decide that Brittany would be not just a cheerleader, but a dumb cheerleader from that point on. Perhaps it's for the best. After all, wouldn't our lives be worse off if we didn't know that dolphins are really gay sharks?

3. The Muppets of Sesame Street

Though Kermit the Frog and company have never been too far from the public eye, they returned last year in a big way with Bohemian Rhapsody, a viral-video take on the Queen classic which was the talk of the Internet and nearly made the song the number-one Christmas record in the UK for a record third time. This year, it was Cookie Monster and crew's time to shine, as the longest-running (and arguably still the best) educational kids show on TV made a viral push- both intentionally and by accident.

In September, around the start of the series's 41st season, Sesame Workshop posted a clip of Elmo and Katy Perry singing about opposites to the tune of the singer's hit song Hot and Cold. The fur flew as many concerned parents believed Miss Perry was underdressed for the occasion, thus sparking a bunch of jokes and controversy. A month later, however, no one batted an eyebrow- except in awe- as Grover showed up in the buff to spoof the now-legendary Old Spice "The Man Your Man Could Smell Like" campaign in a viral video scripted by head writer Joey Mazzarino. Mazzarino was also responsible for penning a song which also spread like wildfire the same month- "I Love My Hair," sung by a black Muppet and originally written for his daughter adopted from Ethiopia, which also recieved a lot of praise (and also lead to an inevitable mash-up with Willow Smith's bizarrely catchy Whip My Hair). Not to be outdone, Cookie Monster posted an audition tape for Saturday Night Live...although he's basically following in the footsteps of someone else...

No, this is not who Cookie Monster is following in the footsteps of- that will come at #1. But, much like Cookie Monster, this unusual fellow has made a name for himself by doing one thing and doing it well- namely, singing.

Singer Eduard Khil wrote a song with a title roughly translated to "I Am Very Happy Because I Am Returning Home." Due to a dispute with either the lyricist or the Soviet censors (sources vary), the original lyrics about, well, someone who was very happy because they are returning home, were replaced with complete gibberish. In the early part of 2010, a vintage film of Khil's performance of this upbeat song became an Internet sensation, in part because of his robotic movements and the blank expression on his face. Perhaps because he sounds like he's saying "LOL LOL LOL" at one point and also musically laughs at another, Trololo Man- as he was quickly redubbed- soon became a popular replacement for the "Rickroll" prank (dubbed "Communist Roll"), and on the televised front, he proved to be the only thing that could cheer up Stephen Colbert and was also satrized by Inglorious Basterds star Christoph Waltz in "Der Humpink," which is exactly what it sounds like. Mr. Khil was tickled by his resurgence in popularity, and for better or for worse, he will most likely be amusing and/or annyoing people for years to come. Truly, he has had the last laugh. Literally. But when it comes to comebacks, nobody had a bigger one this year than...

May 8, 2010 was a date that was perhaps one of the most important in pop culture history this year, if not the most important. Not because it was my 25th birthday (although it was), but because Betty White guest-hosted Saturday Night Live as the result of a Facebook campaign. Surprisingly, the episode was a rarity for modern SNLs in that practically every sketch was a winner, in part due to the patented sure-fire comedy of "an old lady who says dirty things" (as Ms. White herself previously proved in Lake Placid). Her high-rated, Emmy-award-winning appearance led to a number of appearances at awards shows, as well as a TV Land sitcom, Hot in Cleveland. She recieved her own calendar for 2011, and was also honored for her philantropic efforts by being named an honorary forest ranger as well as the president of the Greater Los Angeles Zoo Association. If you could put a face on 2010, it would be the face of Betty White. And all things considered, it's not really a bad face for the year to have.
Posted by Ryan W. Mead at 12:47 AM