An important lesson I learned when it comes to blogging this year: if you're going to make a list, plan out the list in advance. You would think I would have known this already, but for some reason even the most obvious things escape us sometimes.

That "Ten Terrific Obscure Peanuts Characters" list? I was making it up as I went along. It turns out that I couldn't think of ten obscure Peanuts characters. But I was able to think up the top two- I think those were the first I came up with. So, let's just cut to the chase and rather than continue this top ten list, make it a top six by revealing those two...and I think these two are pretty interesting. 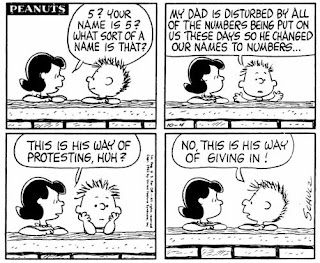 This character, besides being an example of topical humor of the sort that may be more relevant nowadays than when it was first published, leaves behind an even more unusual legacy. 5 was introduced in 1963, the same year the Postal Service introduced ZIP Codes. As you can see, 5's father was overwhelmed with the large number of...well, numbers that were being given to individuals- Social Security numbers, telephone numbers, ZIP codes...in the 40-someodd years since, it's only gotten worse. 5's full first name is 555, which seems to show that the use of "555" as a generic telephone exchange in fiction had already been in practice by 1963 (although that didn't stop Schulz from sneaking the real phone number of Lee Mendelson, the producer of the Peanuts TV specials, into a strip without his knowledge as a prank). 95472- his last name- is the ZIP Code for Sebastapol, California- where Schulz happened to live at the time (and is buried). 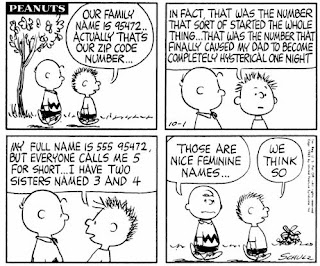 Despite his relative obscurity as a character, 5 has actually earned himself a place in pop culture history. In fact, you've probably seen him every year. You just didn't realize it. Two years after his introduction, the Peanuts gang, who had already appeared in animated form in TV spots for Ford, made their TV special debut with the now-legendary A Charlie Brown Christmas. During the just-as-legendary dance scene- perhaps one of the most famous and oft-parodied sequences in TV special history- 5 and his sisters 3 and 4 take center stage. 5 is the kid in the orange shirt who does the famous head-bobbing move, while 3 and 4 are on opposite sides of him, freely whipping their hair back and forth long before Willow Smith did. Although 5 (along with 3 and 4) never made a name (or a number) for himself, he certainly has a unique place in Peanuts history...as does our #1 character...

Ladies and gentlemen, I give you the Greatest Obscure Peanuts Character Of All Time. Really. For one thing, she is the very first Peanuts failure. But there's another reason that puts her over the top- but that will come in good time. First, I should tell you who she is.

There were a number of one-gag characters in Peanuts. Some, like 5 above, fell into relative obscurity, while others, like Pig-Pen, became popular minor characters. Charlotte Braun, who made her debut in 1954, only four years after the strip began, achieved neither of these. There were only two jokes that she had- her name sounded like "Charlie Brown," and she talked really, really loud. Clearly, given those traits, it's obvious why she never became a Peanuts staple, and disappeared only two months after she debuted after a grand total of less than a dozen appearances.
Charlotte's relative obscurity and general lameness as a character certainly set her apart as an obscure character to top all obscure characters, but one of the main reasons I put her at the top of the list, besides these, is because she was the impetus for what may be the greatest letter ever written.

After Charles Schulz's death in 2000, a woman donated a letter written to her by him in 1955 to the Library of Congress. Said letter was written by her in response to her dislike of the character:


I am taking your suggestions regarding Charlotte Braun, & will eventually discard her. If she appears anymore it will be in strips that were already completed before I got your letter or because someone writes in saying that they like her. Remember, however, that you and your friends will have the death of an innocent child on your concience. Are you prepared to accept such responsibility?
Thanks for writing, and I hope that future releases will please you.

...along with a drawing of Charlotte Braun literally being given the axe: 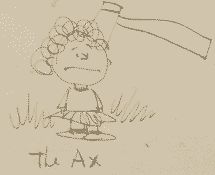 Despite her short life, Charlotte Braun did not die in vain. Truly, as the first and perhaps the shortest-lived obscure Peanuts character, her legacy is not only to top lists like this one, but to prove that even the best of the best- including arguably the greatest comic strip writer and artist to ever live- had their misfires. Be they the well-known or the obscure, all of Charles Schulz's creations continue to live on to this day and will probably continue to do so for years to come. 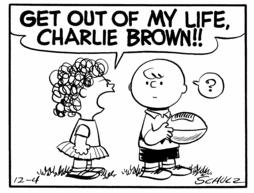 Yes, even the obscure ones.