The Skye's the Limit 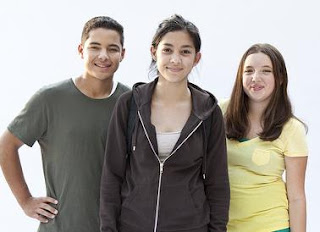 For some reason, Canada has always seemed to be on top of things when it comes to kids' TV. Canadian productions seemed to rule Nickelodeon in the mid-'90s, and more recently, Canadian tweencoms such as Life with Derek and Naturally Sadie seemed much more tolerable and watchable than the domestic tripe it shared time with on Disney Channel. I recently stumbled onto an original web series which not only seems to continue that tradition, but also seems to do a good job of bringing kids' entertainment into the Web age.

I'm a little late to the game in discovering Ruby Skye P.I., which was recently took third place in Clicker's "Best Show for Kids" (hey, Phineas and Ferb is hard to beat- in more ways than one). But as someone who keeps a casual eye on the entertainment scene, I am quite impressed on how it combines standard kid entertainment with surprisingly savvy Web tips- as well as social interaction.

Created by Jill Golick (who is apparently a legend in Canadian kids TV or something), the series itself- which was rolled out as 12 short videos- has an interesting premise: the titular Ruby Skye is a teenage girl who is very observant and just can't help getting herself involved when something suspicious is going on. (In an interesting crossover/spinoff thing, Ruby is the sister of a character from another Golick web project, Hailey Hacks- and Hailey herself plays a supporting role, providing comic relief as it were since she's not too enthused by her sister's snooping.) When Ruby discovers that her quirky neighbor has fallen victim to the notorious Nigerian Scam- and that the e-mail was sent from her very own school- she quickly springs into action. Unfortunately for her, her common sense is not as sharp as her observational skills, and she ends up accusing everybody she knows before she finally gets the facts, forcing her to not only bring the culprit to justice, but also trying to patch up her relationship with her best friend whom she falsely accused as the scammer.


The first thing that sticks out when I look at that last paragraph is the involvement of the Nigerian Scam. A very unusual premise, yes, but since even after all these years people still fall for it, I like the fact that the series is teaching children the important lesson of "don't believe everything you read"- an especially important lesson when it comes to the Internet. (The website also gives additional information on the Nigerian Scam.) I was thinking after watching Ruby that I wouldn't mind seeing it as a TV series, but I now realize that it's meant for the Internet- if it continues, I hope it teaches more Internet safety tips and more about being wary and such.


The more I think about this, the more I have to commend it for combining typical tween entertainment- this being a Canadian production, however, it stands out in quality more than your typical American production (in a good way)- with social interaction and Internet savvy and safety. What is most surprising is that this was an independent production. It will be interesting to see if more producers and studios- both professional and independent- find ways to combine traditional entertainment with the online world, especially as kids are big consumers of both nowadays. Perhaps that itself is something worthy of a Ruby Skye investigation. Let's hope that the big players in the industry aren't experts at rock-paper-scissors...