Phineas and Ferb Get Real? 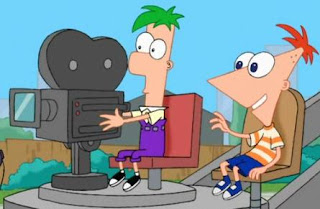 There sure are a whole lot of viral videos out there. I mean, there always are, but today I've seen a good number of them going around. I could write about the Glee video written by and starring Heather Morris, whose Glee character I named one of the five breakout stars of 2010 (which, after the attention it got, should perhaps be renamed "Axe Cop and Four People Who Aren't Axe Cop"). I could write about the Canadian dad who appears to be Archie Bunker reincarnated. I could write about the Simpsons porno and question both a)why it exists and b)why it took so long. But a lot of people have probably written about that already (including some members of my Twitter Secret Circle™). So, instead, I'm going to go in a completely different direction and talk about Phineas and Ferb.

You may be saying to yourself, "haven't you already talked about that on this blog?" Yes. Yes I have. You may also be saying, "who the heck are Phineas and Ferb?" If so, please refer to the previous link. Or if you're too lazy for that: it's probably the funniest all-ages animated series on TV today, and most likely, as the New York Times put it, "the new SpongeBob." And Disney has high hopes for it. So high, in fact, they announced a rather unusual and unexpected project...but one that has a long history in Hollywood.

Yesterday, Disney Channels Worldwide president Gary Marsh announced that Walt Disney Studios, under Sean Bailey, is in the planning stages of a feature film based on the series. Mr. Marsh stated that it is still in the early stages, but apparently, series creators Dan Povenmire and Jeff "Swampy" Marsh (no relation to Gary) will be involved. But the most unusual aspect of the announcement is that the film will be a mixture of live-action and animation.


At first glance, this sounds like it might be one of those "live-action-actors-interacting-with-animated-characters" sort of thing. You got yourself maybe a CGI Perry in there or something. Which makes it sound like it would be the next in a long line of such adaptations probably started by Scooby-Doo, which led to such films as Alvin and the Chipmunks (which not only outgrossed The Princess and the Frog, but was so successful it lead to not one, but two sequels) and Yogi Bear (which did surprisingly poor at the box office, and didn't really lead to much except that video where Boo Boo shoots him in the face). It also brings to mind a similar made-for-TV project that was announced last year: a live-action/animation adaptation of The Fairly Oddparents. Given that this project seems to be somewhat tongue-in-cheek- or at least as goofy and lighthearted as the series is- plus the fact that the series writers and "Savage" Steve Holland (Better Off Dead, Eek! the Cat) are involved, it appears the project could be incredibly awesome or incredibly stupid. Until we get more information about this Phineas and Ferb project- and if the staff of the series is involved in this project as well (the entire writing staff, not just Dan and Swampy- if they actually are involved, which they hopefully will be)- I think the same goes for this as well. All we can do is wait and see.

In an interesting coincidence, another popular Disney Channel series, Kim Possible, had an episode revolving around a Hollywood producer's idea to make a movie based on Kim's life. Not surprisingly, it didn't work out well- especially since Kim's life usually involves fighting crime. (KP was actually the last successful animated series Disney Channel had before P&F- I've been thinking of writing a post about all the unsuccessful series that came in between.) Much like Phineas and Ferb, Kim Possible had a lot of well-known voice talent from both the Hollywood and Disney Channel worlds. Among the voices you may recognize in this episode include Raven-Symoné as Kim's pal Monique, the late great Ricardo Montalban as the wonderfully named Señor Senior, Sr., and Anneliese van der Pol as the actress playing Kim (who herself is voiced by Disney and Broadway vet Christy Carlson Romano). Given that her last project was the latest Seltzerberg tripe Vampires Suck, real Hollywood hasn't been as kind to poor Anneliese, either.

And Phineas and Ferb themselves also got involved (briefly) in the film business- much to the consternation of their leading lady, their easily-riled older sister Candace (voiced by Ashley Tisdale, who makes an amusing cameo in this episode).