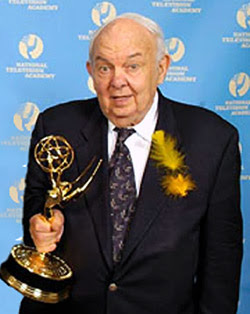 Writer and songwriter Tony Geiss passed away this week at the age of 86 due to complications from a fall. You probably haven't heard of him, but no doubt you've seen his work. Geiss is a credited writer on the well-known Don Bluth features An American Tail and The Land Before Time, but it's over at Sesame Street where he did some of his best and most well-known work. His writing credits for the Street include the TV special Don't Eat the Pictures and the feature film Follow That Bird. I had the chance to hear Mr. Geiss speak at a panel in Wayne, New Jersey alongside other Sesame alumni for the show's 40th anniversary in 2009, where, among other things, he recited the lyrics to this amusing song about cows which he wrote (as performed by the late Richard Hunt, North Jersey's own Muppeteer):

As well as commenting on Jim Henson and Frank Oz's chemistry as Ernie and Bert, pointing out this sketch he wrote for Don't Eat the Pictures:

As far as classic Bert and Ernie sketches go, Geiss is also responsible for this all-time classic:

In later years, Geiss helped develop the character of Abby Cadabby. Opinions on Abby are mixed, but I kind of like her, especially this catchy song that Geiss penned for her:

But Geiss's most influential- and perhaps most divisive- contribution to Sesame Street is helping develop the "Elmo's World" segment. He also wrote its now-inescapable earworm of a theme song, originally written back when Elmo was a bit player.

In 2004, Mr. Geiss sat down for an interview with the Television Academy about his work on Sesame Street, which you can listen to here. I end this tribute with a sweet song which was one of my grandfather's favorites, and one which actually made me cry (in a happy way) when I was a youngster. As Big Bird says good morning to Mr. Sun, we say a sentimental farewell to Mr. Geiss. And thanks for all the memories.

SESAME STREET characters and elements are trademarks of and ©2011 Sesame Workshop. No ownership intended or implied.
Posted by Ryan W. Mead at 12:40 PM