As those of you who follow this blog or my Twitter feed (or both) probably know, I'm a big fan of Charles Schulz and Peanuts. One of the amazing things about Peanuts is how it is both of its time and timeless: the themes and characters of the strip are universal, but due to the fact that Schulz often referenced the pop culture of the time, from Davy Crockett to Harry Potter, it is also a time capsule of the late 20th century. For example, Charlie Brown idolized various baseball players over the years in the hopes that his infamously poor team could be like them: in the 1960s, he lost a spelling bee when he had Willie Mays on his mind when asked to spell "maize"; in the late 1990s, he wrote Joe Torre for managing advice at the time he was creating a new legacy with the Yankees- which was also the same era Schulz put down his pen for good. Despite this, most of the gags and situations that Schulz created are ones that people of all generations can relate to and recognize: sibling rivalry, crushes, struggles in school, persevering despite failing time and time again.

Because of this, it's not surprising that the Peanuts characters have endured even 11 years after Schulz's retirement (and, sadly, passing). The classic television specials still do well in the Nielsen ratings each year, and Peanuts merchandise remains as inescapable nowadays as it has for years- so much so that Charles Schulz frequently appeared as a close second to Elvis Presley on Forbes magazine's annual Halloween list of highest-earning dead celebrities (though, not surprisingly, the list got a new #1 last year with the passing of the King of Pop).

And Peanuts remains a big business. As of this week, syndication rights to the strip are now held by Universal Uclick, after 60 years with United Media. A number of newspapers asked their readers whether or not it was worth the effort of signing a new contract to continue running reruns of a long-dormant strip, but it appears most of them have decided to keep it running. (Universal also announced last year they are taking over Dilbert's distribution, and this week announced that come June they will take over the syndication of all of United's features.) Last year, the rights to the Peanuts franchise were sold to a joint venture of clothing manufacturer Iconix and the Schulz family. The company, Peanuts Worldwide, has, among other things, been bringing Snoopy and friends into the social networking sphere, recently creating an official Facebook page. Iconix's Rocawear recently introduced a clothing line combining the classic characters with lyrics from the work of company founder Jay-Z- the combination, though bizarre, surprisingly works.

But one of the projects Peanuts Worldwide has up their sleeve that really intrigues me is the animated special due next month on Warner Home Video, Happiness is a Warm Blanket, Charlie Brown. Craig Schulz, Sparky's son and part of the creative team who oversees the characters- which also includes Schulz's wife Jean and Pearls Before Swine cartoonist Stephan Pastis- recently told a number of outlets, including Home Media Magazine and Creators Syndicate, how this project came about. It seems that when the home video rights to the Peanuts specials were sold to Warner Home Video after years with Paramount, two new specials were in the contract as well.

This is actually the second time Warners has done something with the characters under their license- the first was a series of "motion comics" a couple of years ago. Of the four major members of the creative team responsible for the classic specials- Schulz, producer Lee Mendelson, director (and voice of Snoopy) Bill Melendez, and composer Vince Guaraldi- only Mendelson is still with us (though not involved in these projects), so putting together a new creative team would obviously be a very difficult task. I'm sure Studio B up in Vancouver is a great Flash animation team, but they didn't do very well with these adaptations of Schulz's gags- the animation is somehow more crude than the earliest of the TV specials.

Thankfully, this doesn't appear to be the case with Warm Blanket. An interview Al Roker did on the Today show with Mrs. Schulz last year for the strip's 60th anniversary featured what appear to be a few clips from the special, animated at Wildbrain and directed by Pixar's Andy Beall (who also takes over Melendez's beagle duties). The animation is very fluid and looks like it comes from the 1960s, and Mark Mothersbaugh's music is appropriately Guaraldiesque. (For those of you who, like me, shudder at anyone else putting words in Charlie Brown and company's mouth, rest assured the gags and dialogue come directly from Schulz's own strips, as many gags from the specials have since the beginning and all have since Schulz's death.)

Visit msnbc.com for breaking news, world news, and news about the economy
But there's more! In relaunching their kids line under the new name Kaboom, comic imprint Boom! Studios recently announced they were doing a Peanuts-related project. Many- including myself- wondered what it could be, especially since Schulz himself dictated no new Peanuts material would be able to be written after his death. It turns out it's a graphic novel adaptation of the special. And I must admit, seeing the preview pages of this make me look forward to this special even more...as well as its graphic novel adaptation. The drawings are very Schulz, but the artists have taken their own unique spin on it without making it look "odd." Here are two of the preview pages as an example: 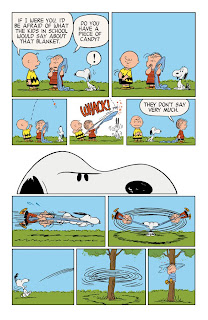 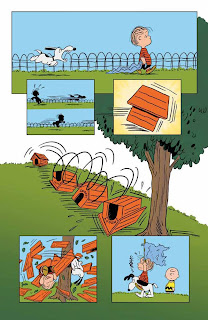 Schulz was very good both at dialogue-driven gags and sight gags, and these two pages do a good job of adapting both of those. Some of the panels look like they could have come directly from the comic strip, while others- such as the closeup of Snoopy and the "action shot" of the doghouse rolling down the hill- deviate from the norm, but do a good job of getting the action across. You can tell what's happening very easily. Schulz's sight gags often worked as well in animation as they did in print, and this print adaptation of an animated adaptation of his work seems to show that as well.

Both the DVD and the graphic novel come out in March, and you can expect a review of them here. The team at Peanuts Worldwide certainly seems to be showing that you can teach an old dog new tricks- but when a dog like Snoopy is involved, those "new tricks" aren't really that new to begin with.