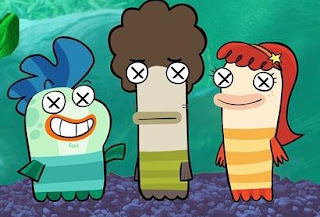 One of the members of my Twitter Secret Circle, Ukari Bakosi (alias RacattackForce of The [Real] Scratch Pad), pointed me in the direction of an interesting comment that makes me wonder if the possible Disney Television Animation renaissance which looked like it might be coming on the heels of Phineas and Ferb may be dead in the water before it even started.

For a little background, we have to go way back into the archives of the official blog of The Animation Guild. Way back in 2006, when Phineas and Ferb was first being developed, some of the commenters in the industry left some interesting comments regarding the fact that P&F was a unique creature in the animation industry- a show that was storyboard-driven rather than script-driven. Much like in the old days (old Warner Bros. cartoons, for example), the dialogue and gags were not already written out at the start, but rather, a simple premise was thought up from which the entire team suggested gags and dialogue. It was an odd duck, which led P&F staffer Chris Headrick to remark:

DTV's [Disney TV Animation] script-heavy output has led to losing many kids to other, more story-innovative shows, like [Dexter's Lab and Johnny Bravo]. Now there's a concerted effort at DTV to make cartoons like CN and Nick have, hence taking the risk on premise shows again. Right now, the "premises" are still eight pages or so long on Phineas and Ferb! It's tough to wean people from scripts when they are used to them. Nevertheless, it is starting to be evident to the powers-that-be at Disney that 8 pages of script = 8 minutes of screen time, but 8 pages of premise = 20-30 minutes of screen time...

haha that must be a very old comment. chris quit the show. his #1 reason? the SUFFOCATING amount of executive notes and executive meddling on the show. A lot of P&Fs best storyboarders left the show for other projects, and the typical Disney mountain of notes was a big reason they chose to move to other places. next time you see chris, just ask him--the stories of DIsney execs with their hands messing all over that show are crazy.

You hear a lot about the creative struggle between the creative end and the business end, and apparently there was a lot of it at P&F, as Wired pointed out in a feature article on the show:

Early on, when Disney suits began pecking at [creators] Marsh and Povenmire with questions and suggestions—does Phineas’ head have to be triangular? can the platypus character have a girlfriend?—Povenmire threatened to walk. “I finally said, ‘Look, you can make whatever show you want to make. But if you want me to come work on it, it’s going to have to be the show I pitched to you,’” Povenmire recalls. “Otherwise, I can make more money if I stay at Fox this year.’” It was Marsh who pushed back when an exec questioned whether Phineas and Ferb had to be step-siblings—a relationship rarely seen in kids’ animation since Cinderella (and we know how that turned out). But Marsh was adamant. His mother has been divorced and remarried so many times, the family calls her current husband Sev, as in her seventh. As a child of a family so blended it’s nearly a smoothie, he wanted kids to see a happy postdivorce family onscreen. Furthermore, Povenmire and Marsh wanted Phineas and Ferb to be funny but not snarky, a distinction that didn’t come easily to animation scribes. “It was hard for our writers to get on board with that concept,” Povenmire says. “One actually asked us, ‘Do these characters have any personality?’ Well, yes, they do. It’s just not the personality you’ve written for the past 10 shows you’ve worked on.” When Phineas and Ferb finally debuted in 2007, however, the show was an instant success, quickly proving it wasn’t “too smart” for TV.

By sticking to their guns, the creative team of Phineas and Ferb truly proved doing things the old-fashioned way leads to a hit. One that the business end wants more of. David Levine of Disney Channel once said, "I think animation is on its way to making a comeback...I know from what some of our competitors are doing there’s a huge ramp up of animation and so I think we’re going to be seeing a resurgence in animation over the next couple of years...The holy grail for us would be animation and comedy for Disney channel, something that can sit along Phineas and Ferb, something that can sit along our newest show, Fish Hooks, which if you’re a screener I hope you get a chance to see, because it’s hilarious. That really is the Holy Grail for us." Apparently, the business end thought that Fish Hooks would be the next Phineas and Ferb, and from the bizarre writing, that certainly does seem to be the case. However, an anonymous commenter on the TAG blog had this to say when the show was picked up for a second season in December:

Its not going to be a frutiful continuation of FishHooks. Alex Hirsch, who worked tirelessly to craft that show has moved on and two of the three senior writers (the two good ones) were not asked to return because they continued to push boundaries of the show. Their replacements were selected with "following orders" as one of their main attributes. You'll see how drab, unfunny and unimaginative the 2nd season product will be. Disney TV continues to be ruled by committee churning out the boring.

More recent episodes of Fish Hooks have seemed a little weaker than the earlier ones, but since the second season hasn't started yet, I don't know if this is a result of that or just the staff having an off day. Not everyone is going to bat 1.000, but the fact that Phineas and Ferb gets pretty damn close is a testament to its writing staff and, I assume, how it's produced. If this is the case and Disney TVA wants to keep its staff in line rather than allow them to run free, then it seems that Phineas and Ferb may have been a fluke- a well-written and financially successful fluke- rather than a sign of a new era of Disney TV animation dominance. Best of luck to Mr. (Clamantha) Hirsch on his new show Gravity Falls- I'll be interested in seeing if it's actually good...
Posted by Ryan W. Mead at 11:29 PM