At a time when everyone is doing Oscar predictions, I, who knows next to nothing about the nominees, am taking this time to squash a really stupid rumor that is going around Twitter and Tumblr, which appears to be a side effect of what I call "Nostalgic Bias Syndrome"- which I will get into one of these days. 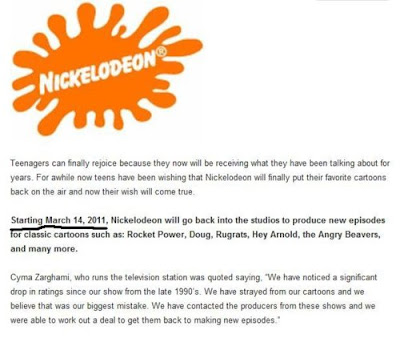 This image is going around the Internet. It is so obviously false that it's not even funny. For example: Nickelodeon doesn't even use that logo anymore, their ratings haven't somehow plummeted in recent years (seriously, look at a listing of the most-watched shows on cable and see how many times SpongeBob comes up), such a plan wouldn't be economically feasible...

It appears that this rumor was started by a NBS-driven "article" from a high school newspaper. Which is odd, since I was pretty damn sure that the sort of NBS that twentysomethings use towards Nickelodeon has shifted to the Disney Channel when it comes to today's teenagers. Some of the quotes from that article are both hilarious and sad at the same time. For example: "Teenagers have wanted to show kids now-a-days what a real cartoon is made of but never had the evidence to convince these pups. Starting next month; these kids are in for the surprise of their lives." Which is basically a fancy way of saying "YOU DAMN KIDS GET OFFA MY LAWN." Either way, the spread of this stupid, stupid rumor seems to show how NBS overcomes common sense, especially on that breeding ground of moronitude generally known as "The Internet." USE YOUR BRAINS, PEOPLE!