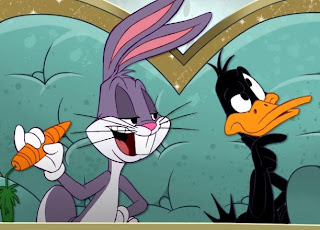 When The Looney Tunes Show was first announced, people online (and most likely no doubt in the real world as well) had their trepidations regarding what appeared to be a travesty on the level of...well, something. After all, Bugs Bunny and the bunch are arguably some of the greatest characters of all time, and their classic shorts are some of those rare pieces of film that still remain amusing and entertaining even today, with four of them- including the fourth-wall-breaking gem Duck Amuck and What's Opera, Doc? (a cartoon which, though I see the love for it, is overrated as far as I'm concerned- I believe I once read Chuck Jones himself preferred Rabbit of Seville when it came to his cartoons mixing Bugs, Elmer, and classical music; a sentiment I agree with)- being chosen for inclusion in the Library of Congress's National Film Registry. The voices became even louder when clips from the series started appearing, which showcased the humor style of the series- more based on character relationships and witty dialogue a la current Cartoon Network hits such as Regular Show than the mixture of these with slapstick and music-based gags (the "tunes" in "Looney Tunes") that the original shorts did. (It should be pointed out that Warners has attempted many times to revive the characters, something perhaps I will look into further in the future.)

So, is The Looney Tunes Show the travesty everyone said it would be? Not really. Does it hold up to the classic shorts? No, but I don't think it's supposed to- these incarnations of the wabbit and his cwew can be seen as separate from the original ones, and I think that was the point. Is it an amusing show on its own merits? It's not laugh-out-loud funny, but it's amusing enough that it's worth a look, and will hopefully improve once the writers get in the swing of things.

The Looney Tunes Show can be best described as a sitcom starring Bugs Bunny and Daffy Duck. Not surprisingly, that combination is a chaotic one, with your typical odd-couple antics: Daffy, just as greedy and self-centered as he was under Chuck Jones's supervision with a bit of comic dimwittedness thrown in, got the ball rolling on this week's debut episode with his greedy side getting the best of him when deciding to go on a Newlywed Game-style game show about how much you know your best friend, with his egotistical side (combined with that dimwittedness I mentioned) coming into play after it soon becomes apparent he knows absolutely nothing about Bugs. The level-headed lagomorph remarks that Daffy's picture would most likely be in the dictionary under "self-absorbed," which, not surprisingly, leads Daffy to vainly respond, "My picture's in the dictionary?" Most of the jokes are in this vein- very sitcommy one-liners. Perhaps a step down from what you expect from a Looney Tune, and not laugh-out-loud funny, but amusing enough. In one amusing sequence, Bugs attempts to train Daffy for the show by telling him his backstory, quickly switching to Superman's once Daffy loses interest- he is, of course, none the wiser. (Being another Warner Bros. property, we actually see a rabbit version of Superman's origin complete with John Williams theme, as the rabbit Jor-El intones that his wayward son will be "fast, virtually indestructible, and say 'what's up doc' indiscriminately whether speaking to a doctor or not." Bugs's legendary catchphrase- and Daffy's ignorance of it- becomes a running gag throughout the episode, leading to one moment which actually did make me laugh out loud.)

Bugs and Daffy's characterization is both familiar and different, with their characterizations tweaked slightly. Despite this, they are still recognizable as themselves for the most part. Future episodes will bring other familiar faces into play (as well as introduce girlfriends for Bugs and Daffy that are their polar opposites, with Bugs paired with Lola, who has apparently been rewritten from her no-personality debut in Space Jam into a ditzy airhead, and Daffy being given a down-to-earth female foil named Tina), and we got a bit of that in this episode. Speedy Gonzales (whose Mexican accent as provided by SNL's Fred Armisen manages to be even more un-PC than Mel Blanc's original) serves as a voice of reason for Daffy but only ends up bringing out his daffy side in a scene that, as a number of others have pointed out, was perhaps more entertaining than all of his inexplicable team-ups with the duck during the '60s dark age of the original short subjects combined, and the Goofy Gophers appear as competitors on the game show pretty much unchanged from their usual genteel ways (though some of the jokes bring the question regarding the true nature of their relationship to the forefront perhaps more than it was in the past, if that's even possible). An amusing "Merrie Melody" music video serving as an act break featured Elmer Fudd channewing Wuther Vandwoss and the wike in a sensual sewenade to a gwilled cheese sandwich (yes, you wead...er, read that correctly)- future Melodies will spotlight other characters and musical styles.

The characters have been redesigned slightly, another thing which put many off. For the most part, the redesigns don't really bug me- they seem very much like the characters we know and love, perhaps with a early Bob Clampett touch. The only one that really put me off at first was Bugs, but he's grown on me. I think it's because Bugs, even though he's had many redesigns and tweaks over the years, is such an iconic character that to see him look even a little off is jarring at first. But now I don't notice the difference- especially when he's actually in motion. I'll admit I wasn't paying that much attention to Bugs and Daffy's voices as much as what they were actually saying, but I do know my early thoughts were that Jeff Bergman's Bugs and Daffy were recognizable as the characters but somewhat off. I don't know if it's Bergman's not doing the characters for a while or his aging- 20 years ago he was the original replacement for Mel Blanc and was spot-on- but we'll have to see if they improve as the series progresses. The rest of the characters heard in the episode (with the exception of Speedy, as mentioned above, whose original voice probably wouldn't work for the role he's playing here) are spot-on recreations.

The Looney Tunes Show is not laugh-out-loud funny, but it's amusing enough. The characters are still "in character," but with a few tweaks for the sake of the format and comedy. It's both what we expect from "Looney Tunes" the characters but not what we expect from Looney Tunes the franchise. And that's not necessarily a bad thing. Nothing can replace the classic shorts, and it's obvious the team isn't even trying to, but they can both co-exist and be enjoyed on their own merits for different reasons. And the new show is by no means the travesty some early naysayers feared it would be. Bugs, Daffy, and the like have always seemed like they were "actors," being able to play different parts depending on the situation. And the part they play here isn't the greatest, but it's not dethpicable either. The Looney Tunes Show looks like it can have potential to be its own unique, amusing take on these classic characters- and th-th-th-that's probably the best anyone could ask for, folks.

LOONEY TUNES, THE LOONEY TUNES SHOW and related properties are trademarks of and ©Warner Bros. Entertainment, Inc. (s11) No ownership intended or implied.
Posted by Ryan W. Mead at 10:13 PM