When Charles "Sparky" Schulz passed away a decade ago, he left behind one of the greatest legacies not only in comic strip but possibly pop culture history: almost 50 years worth of daily comic strips all written and drawn by himself alone, starring some of the most recognized and well-developed characters in comic strip history. By employing both well-written gags and stories as well as references to the pop culture and current events of the time, Peanuts remains both a time capsule of postwar American suburbia and a source of timeless humor. Schulz himself stated a number of times in interviews his doubt that anyone would remember his work after he was gone, but given that the characters still can be seen practically every day on store shelves, on TV, and in newspaper reruns, it seems that the characters will be around for a long time to come. As Schulz himself wrote when he bid his readers farewell, "Charlie Brown, Snoopy, Linus, Lucy...how can I ever forget them?"

But much like any long-running pop culture institution, such as The Simpsons or Saturday Night Live, the world of Peanuts wasn't fully populated overnight. Various characters, both well-known and not, made their debuts even up to the end of the strip's run. Some stuck, some didn't, and thus there were a few players in Schulz's repertory company who were forgotten for some reason or another. Whether it's because their role was eventually taken over by another character or they just didn't go over to begin with (or were never meant to), the failed characters and supporting cast of Peanuts is often just as interesting as the main cast. So here are ten of my favorite obscure Peanuts characters. This is by no means a "top ten" list- unlike Roger Ebert, I don't mind making lists, but like him, I know all lists are subjective. So, in a way, it is a "top ten" list, but it's by no means the top ten. To create a bit of suspense and to create some content for myself (since I have been a little lacking in the update department), I won't be posting all ten all at once- maybe one or two a day. So let's start with:

Picking a character who never appeared and was never meant to may be cheating a little bit (a cheat I'm guilty of a number of times on this list), but sometimes a person doesn't even need to make much of an appearance to make an impact. Such is the case with Joe Shlabotnik, a character who never actually appeared in the strip but certainly is remembered, mainly for the fact that he has a funny name.

"Joe" is such a common name that it's used a lot in the English language to represent ordinariness, such as "average joe" or "G.I. Joe" (a nickname for an ordinary soldier during World War II which later became the name of a popular toy soldier). During the 2008 presidential campaign of John McCain, "Joe the Plumber"- an actual plumber named Joe* whose name and occupation coincidentially combined to make a nickname that could represent not only himself but also sounded like an average middle-class American of the sort McCain was hoping to appeal to- briefly became a celebrity. And Schulz himself combined various words with the name to create a number of minor and/or gag characters, such as a marble player named Joe Agate (who interestingly enough was voiced in a TV special by Taylor Lautner a few years before he became famous for another reason), Spike's only "friend" in the desert Joe Cactus, and perhaps most famously, Snoopy's hip college student alter ego Joe Cool. But adding the funny last name "Shlabotnik" to it seemed to amuse Schulz so much he used it multiple times, first as the name of a fictional classical pianist (with a slightly different spelling): 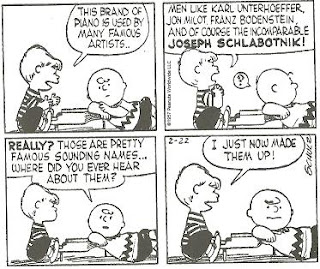 "Shlabotnik" (sans "Joe") also showed up in a gag Schulz did in his other (short-lived) sports-based panel strip, It's Only A Game, a few months later (again with a somewhat different spelling than that finally used in Peanuts): 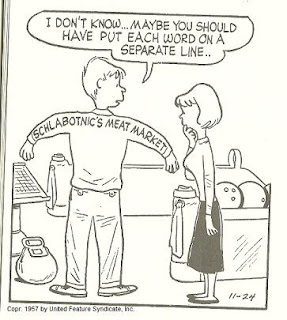 And it was in the realm of sports that Schulz would cement Joe Shlabotnik when he reused the name in Peanuts as it would be finally used multiple times- as the name of an unnotable major-league baseball player. So is it any surprise that he is the favorite player of another unnotable average...er, Joe baseball player (namely, Charlie Brown)? Later in his career, Shlabotnik played for a minor-league team with another very funny name, the Waffletown Syrups. Given Charlie Brown's luck, it's not surprising that this disappointing player was able to disappoint by doing such things as failing to show up at a sports dinner Charlie Brown attended for the sole purpose of meeting him. There are worse things a sportsman could go down in history for than having a funny name. Given his apparently poor career, perhaps it's for the best that Joe Shlabotnik gained fame in the Peanuts universe for that exact reason. 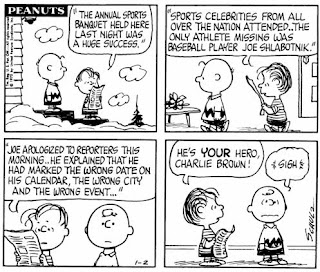 All PEANUTS® comic strips and characters ©2010 Peanuts Worldwide LLC. IT'S ONLY A GAME ©Charles M. Schulz Trust. No ownership intended or implied.


*UPDATE: Thanks to avid reader Galileo of Beaming for Bunnies and In 10 Words for pointing out that "Joe the Plumber" was neither a Joe nor a plumber- he was a plumber's assistant named Sam (Joe was his middle name).
Posted by Ryan W. Mead at 7:09 PM