7. The School Building
Snoopy's doghouse. Schroeder's piano. Lucy's psychiatry booth. Objects that have become as well-known in the Peanuts universe as the characters often seen next to them. But one object- or rather, building- in particular actually became somewhat of a character once it started thinking on its own, taking a literal approach to the phrase "if these walls could talk"- or at least think. (Not that someone actually needs to voice their opinions in public to be "heard." Just ask Snoopy- if you can.)

Every child has had an antagonistic relationship with school in one way or another. For Sally Brown, one character for which school takes up most of her life (perhaps more so than any other Peanuts character save Peppermint Patty in her later years), this relationship took an interesting turn in 1974, when the school building actually started responding to some of the anger Sally dished out at it- or at least, responding as much as a school building can. 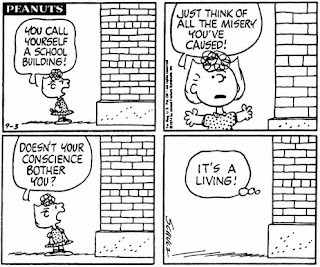 In his well-written (and which I highly recommend reading if you haven't already) 2007 biography Schulz and Peanuts, which caused controversy within the Schulz family due to how their father was depicted, author David Michaelis pointed out that this series of strips came about shortly after Schulz fell in love with and married Jeannie Clyde, an event which helped him come out of the funk that resulted from his recent divorce. (Michaelis's depiction of Schulz's first wife Joyce as a domineering woman and perhaps the inspiration for Lucy's similarly domineering attitude, especially when it comes to Schroeder- whom Michaelis sees as Schulz himself, more interested in his "music" (read: cartooning) than what she has in mind- was in particular a subject of debate and controversy when the book came out.) Michaelis hypothesises the school building might represent Jeannie herself, which seems a likely theory when we take into account that it once comforted Sally by calling her "poor, sweet baby"- a term Jeannie frequently called Schulz (and which Schulz in turn frequently used in the strip, eventually immortalized by Grossman and Hackady with a song in the lesser-known Peanuts musical Snoopy!!!), and even more so when you look at strips like the following: 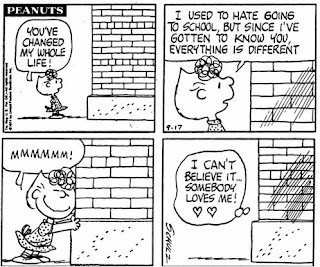 But if that's the case, how, then, are we to take into account the final fate of the school building? In January of 1976, it committed suicide- at least according to Sally ("Well, I happen to know that it had been depressed for some time!"). Although Sally made her way into the new school building just as clueless as ever, Peppermint Patty was forced to share a class (and a desk) with Charlie Brown...and you can probably imagine how that turned out. By the fall of 1976- just in time for the new school year- the original building had been reconstructed...though, not surprisingly, without the job experience of its predecessor, it was less than eager to chalk up conversation with Sally- or do its job, for that matter. 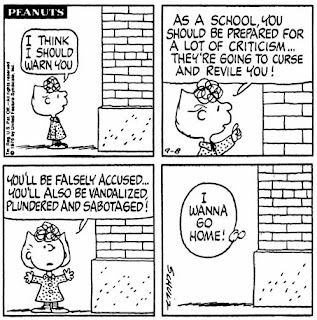 Whether or not there is any deeper autobiographical meaning to be found in Sally's friendship with the school building, it seems only fitting that the character with the biggest apathy towards school would find a kindred spirit who feels the same way...and that it would be the school itself. If anything, it gives a lesson for those of my readers (if any) who may still be in school themselves...if you think you're having a hard time, think of how the school itself must feel. After all, it's had to put up with this nonsense much longer than you have. And if you think it's a bit crazy to emphazise with a school building, well...just don't say that to its...um...face? After all...