Bill Watterson famously refused to license Calvin and Hobbes and spoke out frequently against cartoonists who seemed to be in the business only for the licensing money rather than the art of it. Although Peanuts is perhaps the most lucrative comic strip ever in terms of licensing, Schulz always put the strip first. He had no problem with licensing the characters or using them for advertising- he didn't see it as "selling out" because he saw comic strips as a commercial product meant to promote newspapers. In the mid-'70s, Schulz renegotiated his contract with United Features for a 50-50 royalty split and final approval on all merchandise- not for the money, but for, as he put it, so that United couldn't sell Charlie Brown razor blades in Germany without his authorization. With that in mind, it's hard to tell what Schulz had in mind when he came up with Tapioca Pudding, a character who appeared in a single storyline satirizing merchandising. 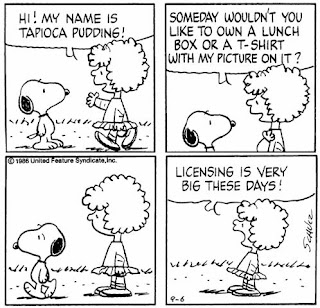 Tapioca's father, Joe Pudding (another "Joe" name!), thinks that she looks like a million bucks- literally. But then again, he is in licensing. And she won't shut up about it, which Linus learned the hard way in late 1986 as he started going out with her (much to the consternation of Sally, who considers Linus to be her "sweet babboo"- although as with most "romances" in Peanuts, he does not feel the same way.) Ironically, it took one of the most famous licensing icons of all time to get her off Linus's back, acting as a world-famous licensing agent who got her a stint at the opening ceremonies of the 1984 Olympics. Yes, you read that correctly. 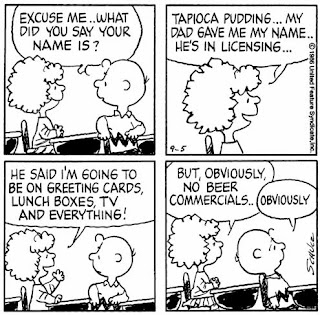 Compared to other Peanuts storylines, this one is rather weak, short, and doesn't really go anywhere. I'm not sure if it's because of how late in the strip's run it was, Schulz not being able to come up with ideas, or, if he was trying to satirize overlicensing of comic strips (which seems likely), Schulz not wanting to bite the hand that feeds him too hard (which seems unlikely, given his good relation with the syndicate). Either way, Tapioca Pudding stands out as an interesting minor minor character, especially in the age of Miley Cyrus and other real-life youngsters whose face can be seen everywhere...and some of which are encouraged by their parents.