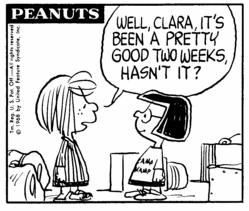 Every season has its traditions, some common and some not. And in the Peanuts universe, this is no exception. Winter is a time to play in the snow and get together to celebrate Christmas (or Beethoven's birthday). Fall brings with it football season and Halloween, the perfect time to practice your place kicks or wait for the Great Pumpkin. And for many kids, summer means time to go to summer camp. For many years one or two of the characters or even the whole gang headed off to camp during the summer, often leading to a number of memorable storylines. And for one character, summer camp led to meeting someone who would later become a close friend and the straight woman in a comedy duo...but the real question is, when exactly did that happen?

One of the more memorable characters in Peanuts who wasn't part of the original cast got her name from a dish of candy. A character whom Schulz often said could carry a comic strip of her own, Peppermint Patty made an interesting transition as the strip progressed regarding her personality- which in part was due to the fact that she had someone else to work off of. When she first entered the Peanuts universe in 1966, Peppermint Patty was clearly a product of the '60s feminist movement- a baseball-playing tomboy who wasn't afraid to speak her mind, and whose brash attiude was certainly different than that of Charlie Brown and his friends, the humor coming from her interactions with them. Despite having a good head on her shoulders, she was a little clueless at times as well, believing Snoopy to be a "funny-looking kid with a big nose." Eventually, Peppermint Patty mellowed a bit and her ignorance (or just plain not caring) about the world at large overshadowed her attitude as the years went by, with the humor in her character now coming from her struggles at school, be it her tendency to nod off in class or her difficulties with schoolwork in general. Serving as the voice of reason to offset Peppermint Patty's chaotic behavior in class was Marcie, whom Peppermint Patty met in summer camp during the summer of 1971...or was it the summer of 1968?

In July of 1971, both Charlie Brown and Peppermint Patty headed off to gender-divided summer camps (along with a certain World War I flying ace). Peppermint Patty ends up meeting a girl who has the strange habit of calling her "sir," while much to Charlie Brown's dismay, his bunkmate has nothing to say but "shut up and leave me alone." When Peppermint Patty sneaks over to the boys' camp to see the blockhead she has a crush on (bringing her new pal in tow), she takes Chuck's bunkmate's apathy personally, leaving practically everyone confused.
Later that year, Peppermint Patty's crush on Charlie Brown brought forth another storyline in which she discusses it with her new pal during a game of "Ha Ha Herman" (a hide-and-seek type game which must be a Schulz invention, given as I cannot find any non-Peanuts-related reference to it). It is here where the bespectacled, somewhat naive girl gives her name for the first time. 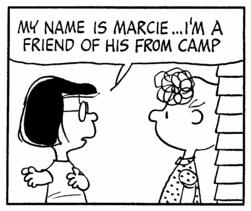 Or is it? Three years earlier, Peppermint Patty served as a camp counselor at Camp Kamp (another funny name!) for three young girls. Interestingly, one of the three, Sophie, had the comedic habit of calling Peppermint Patty "sir," just as Marcie would do. But perhaps most interestingly, another one of the girls, Clara, happens to look exactly like Marcie- the only difference being that her pupils can be seen behind her eyeglasses. 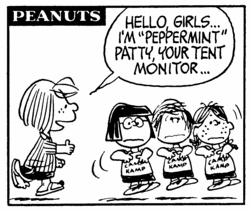 So, what exactly happened here? Are Clara and Marcie the same person? Clara is nearly a head smaller than Peppermint Patty, indicating she is much younger. Did Clara have both a growth spurt and an unfortunate incident that led to her family joining the Witness Relocation Program in three years' time? Are Clara and Marcie sisters? Or did Schulz just like the character design and decide to reuse it? Either way, Clara is an interesting oddity in the Peanuts universe, with her brief appearance setting the stage for a future Peanuts star and creating an unsolved mystery along with it.